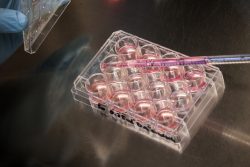 In a global-first, researchers from Chinese Academy of Sciences and BGI-Research and other partners, have announced the discovery of a rapid, transgene-free, and controllable way to change pluripotent stem cells into authentic 8 cell totipotent embryo-like cells. This paves the way for future advances in synthetic biology and regeneration of organs.

The teams used the technologies of advanced single-cell sequencing from BGI to assist in changing pluripotent stem cells or an adult type of early embryonic cells into a juvenile type. This ensures that it will activate human zygotic genome and keep all the lineage along with the potential of development.

The cells could possibly be useful in prospective regenerative medicine for human organs that are diseased and would also reduce the reliance on donation of organs. They could be used to build artificial blastoids and blastocysts. They also would be useful in the study of human embryonic development, prevent pregnancy loss and help treat related diseases that develop early.

This technology that changes pluripotent stem cells into inner cell mass-like cells inside the blastocyst has been around for a while. In this new study scientists have been able to establish methods that change pluripotent stem cells to an early phase in the human development cycle that equals the 8 cell embryo. This will provide insight into the development of the human embryonic system. Essentially the team showed that the cells that were converted could create placental cells in vivo which is the only time this has been achieved.

Totipotent 8 cell stage embryo like cells recreate an embryonic state of an egg that has been fertilized following only three divisions. In comparison to the reported pluripotent stem cells, these distinct cells will not only change into placental tissue, but can possibly develop into a more mature organ which is good news for the number of patients needing transplants all over the globe.

The breakthrough is in addition a great portrayal of the combination of the technology of single cell sequencing and regenerative medicine. Through single cell large scale multi-omics profiling the precise and efficient identification of tissues or cells obtained in vivo or in vitro by stem cell technology will considerably speed up research on regenerative medicine.

At the early phase of development these cells can be reported as totipotent which means they have the possibility of creating all types of early embryonic cells. This in turn will create the organs and tissues which are required for development and adds to early work with plenipotentiary stem cells at the blastocyst stage. This is a point where cells have the possibility to create a more restricted range of different tissues and cells.

The team who conducted the research treated pluripotent stem cells with a cocktail of chemicals to create the 8-cell embryo like cells. Other experiments that were done was sorting and injecting these cells into a mouse for further development and then examined using BGI’s single cell genomic analysis. The innovative technology was able to help researchers find and isolate the target 8-cell embryo like cells and show their totipotent capacity to establish the cells which can generate the placenta in vivo.

These advances could eventually bring about individualized regeneration of organs a reality. Currently the only way that is available for people in need of an organ transplant is through a donor that matches and this course of action is not without problems. Transplant failure can occur if the donor’s serotype is not close enough to the recipients. Another procedure which is designed to modify organs of animals for transplantation to people through gene editing is also in its early stages.

The achievement also shows a new in vitro system of key research on early embryonic development that helps the team discern the relationship between it and the occurrence of diseases. It is also a resource for the treatment and study of various development diseases such as birth defects.

To view the original scientific study click below:
Rolling back of human pluripotent stem cells to an 8-cell embryo-like stage