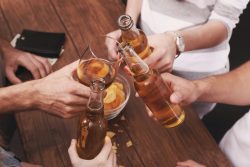 The UK’s recommended consumption of alcohol is 14 units or less per week. This is the weekly equivalent of 6 pints of average-strength beer or 10 small glasses of low-strength wine. New research shows that even this amount may increase cardiovascular issues such as heart and cerebrovascular disease.

Researchers examined hospitalizations of 333,259 people relating to cardiovascular occurrences. These people were between the ages of 40 and 69 and all drank alcohol according to data from the study at the UK Biobank. The participants provided information as to their total weekly consumption of alcohol and the specific kinds of alcohol which included wine, spirits and beer.

Their alcohol intake was accessed for 7 years and included any occurrences where they were hospitalized due to cardiovascular events. Anyone that had a past cardiovascular event was deleted from the team’s analysis. Also excluded were people who were former drinkers or who did not complete the information on their alcohol consumption.

The research team discovered that drinking 14 units or less of alcohol per week was the limit. Every time the participants added 1.5 pints of beer at 4% strength then their risk of a cardiovascular event increased by 23%.

According to the lead author, the “J shaped curve” of cardiovascular disease related to alcohol consumption suggesting health benefits from moderate and low consumption of alcohol is the largest myth since it was told that smoking was good for us. The team argues that there are biases in the epidemiological evidence of this. Biases which are embedded in this evidence will mask or will underestimate the dangers linked with the consumption of alcohol. When these biases are taken into consideration, the adverse effects of low level consumption are shown.

These biases use as a reference group non-drinkers, when many will not drink due to poor health. Other biases include the combining all beverage types when determining the intake of alcohol for a population study. Also people who drink wine have a lower risk of coronary artery disease which potentially distorts the overall cardiovascular risk.

The study showed that those who drank spirits, cider and beer in particular, even those who consumed under 14 units per week showed an increase risk of hospitalization for a cardiovascular event involving the blood vessels or the heart.

We hear about wine drinkers having a lower risk of coronary artery disease than non-drinkers, however the data shows their risk of other cardiovascular events does not decrease.

In future research, avoiding these biases would alleviate the current confusion and possibly lead to guideline strengthening with the current guidance on alcohol reduced.

To view the original scientific study click below:
Alcohol – The myth of cardiovascular protection