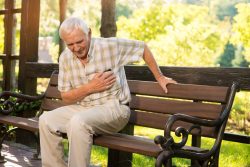 Researchers are now using stem cell based therapies to repair the heart after an injury such as cardiac ischemia or heart attack. Such injuries limit the ability of the heart to pump producing lower oxygen blood levels. That makes it harder for a person to perform daily activities.

The new therapy benefits heart repair by replacing heart tissue that has died with new and functional tissue using stem cells. In previous therapies less than 1% of the stem cells lived beyond transplantation. This is due to their inability to survive in the ischemic environment with its metabolic demands.

From mouse models the research has shown that this problem can be remedied by the reintroduction of a protein called LIN28. This protein is found to be extremely active in a developing heart and can function under low oxygen conditions. Postnatally this appears to slow down and the low oxygen resilience is lost.

The team discovered that by introducing LIN28 to an adult heart the cardiac stem cells express the metabolic qualities of young developing cells. This will greatly improve cardiac stem cells’ chance of survival by providing more metabolic flexibility. It’s almost like reverse aging was in process.

The adult heart is very sensitive to a decrease in the availability of oxygen due to changes in cellular metabolism. This suggests that these characteristics in the heart help determine the affect post transplantation will have on stem cells.

The team wanted to determine if metabolic sensors that are delivered to the developing heart could impart more metabolic flexibility to CTSC’s (cardiac tissue derived stem like cells). These are present in neonatal and adult heart tissue but only deliver LIN28 to a developing heart. In the adult tissue of the heart, CTSC’s possess the potential to regenerate and are generally silent.

The team reintroduced LIN28 in adult mice CTSC’s in vitro, and then analyzed the outcomes on pathway signaling. This is part of cellular growth, metabolism, and regeneration. They discovered that LIN28 expression did produce a great regenerative response. This changed the CTSC’s to promote survival and growth in response to oxidative stress. It resulted in notable improvements in cardiac function and structure.

LIN28 modified energy production in CTSC’s which led to the secretion of many factors that are advantageous for the survival of heart cells. The cells took on a more youthful composition.

The team plans to translate their findings into larger animals and to find out if cardiac stem cells obtained from humans can be reprogrammed by LIN28. The studies have significant value in determining how stem cell therapy for heart disease is approached.