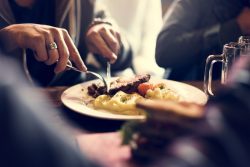 The team investigated the connection between cancer risk and diet through analyzing data from 472,377 British adults from the UK Biobank during the years 2006-2010. The participants were 40-70 years old and reported they consumed fish and meat. Using health records, the research team calculated the occurrence of cancers that had developed roughly over 11 years. They took into account sociodemographics, diabetes status, socioeconomics and other lifestyle factors.

They additionally discovered there was a 20% lower risk of prostate cancer among men who consumed fish but no meat. Those on a vegetarian diet the risk was 31% lower compared to those who consumed meat more than 5 times a week.

Women who were post-menopausal and consumed a vegetarian diet had a lower risk by 18% of getting breast cancer than those who consumed meat more than 5 times a week. However, these findings suggested that this might be due to women who were vegetarian tend to have a lower body mass index than the women who ate meat.

The team do warn that the study was observational in nature and should not be accepted as a causal relationship between diet and cancer risk. And it should be taken into consideration that the dietary information was collected at one time and not over a continuous time period so that it might not be representative of the participant’s lifetime diets.

The team suggests that additional research could done to investigate the link between diets containing little or no meat and the risk of individual cancers in populations that are larger and with longer periods of follow-up.

To view the original scientific study click below:
Risk of cancer in regular and low meat-eaters, fish-eaters, and vegetarians: a prospective analysis of UK Biobank participants