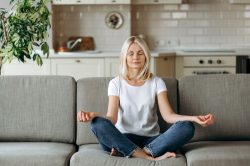 While anecdotally, people who do meditate believe it helps recenter their thoughts, calm their minds and work through the noise to show them what matters most. However, scientifically proving the effects of practicing meditation for the human brain has shown to be somewhat tricky.

The recent study followed how practicing meditation for even just 2 months changed 10 student’s brain patterns in the Scholars Program at the University’s Thomas J. Water College of Eng. And Applied Science.

The beginnings of the research came from a chat between two Professors at the University. One is a longtime practitioner of meditation whose wife just happened to have a North American seat at the personal monastery of the Dalai Lama.

The couple developed many close friendships with some of the monks. They hung out and he even was given instruction from some of Dalai Lama’s teaching staff. He took classes, read a lot and also earned a certification of 3 years in Buddhist studies.

The other professor has studied biomedical image processing and brain mapping while working on her PhD and tracked people with Alzheimer’s Disease using MRI scans.

She was interested in research of the brain with the goal of seeing how people’s brains are functioning and also how a variety of diseases affect the brain. She has zero training in the medical field but she picked up all the background and knowledge from reading literature and speaking with experts.

The two professors had side by side offices and had a conversation on a particular day about their personal backgrounds. It was mentioned that one of the professors had been asked if he would teach a semester on meditation for the Scholar’s Program.

Meditation can have a transforming effect on the brain. It was suggested that perhaps even in a short amount of time they could possibly be able to quantify something through modern technology.

Grant funding was obtained and the collaboration began. At the beginning of the semester participants were given MRI scans of each of their brains. The students then learned just how to meditate and were told to practice 10 to 15 minutes 5 times per day and were asked to journal their practice. The class also included a syllabus with other lessons in regards to the cultural transforming and wellness application of meditation.

Binghamtom Univ. Scholars have to be high achievers who will do things they are not typically assigned to do and also do well with them. So the students do not need much prompting to practice a regular routine of meditation. In order to guarantee the reporting was objective, the students would report their experiences directly to the professor in regards to how often they practiced.

The final results showed that training in meditation showed a faster switching between the two general states of consciousness of the brain. One state is known as the default mode network that is active while the brain is not focused on the world outside but in a wakeful rest. This would be mind wandering or daydreaming states. The other state is the dorsal attention network that engages for tasks that demand attention.

The findings show that meditation will enhance the brain within and among these two states of the brain network. This indicates the effect medication has on switching fast between focusing attention and mind wandering and also when in the attentive state maintaining attention.

A term known as mental pliancy is used by the Tibetans when referring to the switching between the two brain states. The also believe the achievement of concentration is one of their fundamental self growth principles.

They are considering an elderly population since the current study was young students. They want to gather a group of healthy older people and also another group who have mild cognitive impairment or early Alzheimer’s Disease. They want to see if meditation causes changes in the brain and can therefore enhance performance cognitively.

They are very convinced in regards to the basis of science in practicing meditation following this study, although once skeptical.