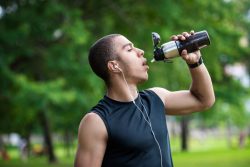 A new study has shown that by staying very hydrated throughout your lifetime, you could be reducing your chance of developing heart failure. The study has suggested that keeping great hydration can possibly prevent or at the very least slow down changes that reside in the heart that ultimately lead to heart failure.

Their findings show that people need to be more aware of the total amount of fluids they consume every day. And then drink more if not drinking enough to keep well hydrated.

Daily fluid recommendations are different indicating anywhere between 1.6 to 2.1 liters for females and two to three times that for males. Unfortunately, most people do not consume even the lowest ends of the ranges for men and women.

The precise measure of a person’s hydration status is serum sodium. When a person drinks less fluids, serum sodium concentration increases. When that happens the body will then attempt to preserve water which activates processes which are known to add to heart failure development.

We may think it’s natural that serum sodium and hydration would change from day to day dependent on how much a person drinks every day. However, concentration of serum sodium over long periods stay within a narrow range. This is most likely linked to constant consumption of fluids.

The particular study examined if concentration of serum sodium in middle age, as their measure of habits of hydration, will predict heart failure development 25 years later. The also looked at the connection linked between wall thickening of the heart’s left ventricle or main pumping chamber which is known as left ventricular hypertrophy which is known as a forerunner of the diagnosis of heat failure.

The study included 15,792 adults in the (ARIC) (Atherosclerosis Risk in Communities) study. The participants ranged in age from 44 to 66 when recruited and then had an evaluation over 5 visits until the 70 to 90 years of age.

The participants were put into four groups which were built on their concentration of serum sodium at the study visits of one and two which were done in the first three years: 135-139.5, 140-141.5, 142-143.5 and 144-146 moll/l. For each of the serum sodium groups the team analyzed the amount of participants who did develop left ventricular hypertrophy and failure of the heart at their fifth visit which was at 25 years later.

The risks of both failure of the heart and left ventricular hypertrophy at ages 70 to 90 started increasing when serum sodium was more than 142 moll/l in middle age.

The results have suggested that great hydration throughout a person’s lifetime might decrease the risk of developing either disease. Also, the findings that serum sodium more than 142 moll/l did increase the risk of negative effects in the heart could help identify people who would see benefit from an evaluation of what their level of hydration is. This level is in the normal range and would not be marked as abnormal in laboratory test results might be useful for physicians when conducting regular physical exams to help identify patients whose normal intake of fluids should be looked at.