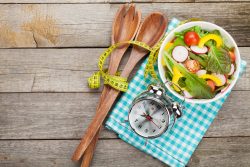 There are quite a few studies that indicate that cutting calories can improve the health of a person and enhance longevity. However, new research indicates an even greater effect when you play to your daily rhythm of eating only during times where there are highest levels of energy requirements in order to optimize longevity!

Calorie restriction is known to extend lifespan in a variety of animals. A recent study found that reducing calorie intake by 30% in male mice improved their lifespan by 10%. The reduction in calories was maintained for over 4 years, and the results suggest that this type of intervention could be beneficial for humans as well.

A recent study found that when combining calorie restriction with daily fasting intervals, the lifespan of the mice increased by a notable 35%. This means that on average, the mice lived 9 months longer. For humans, this would be equal to increasing lifespan by up to 20 years.

The research found that longevity improved by a lot on the time-restricted diet, but it did not increase weight loss. This explains why many diet plans that emphasize eating only at certain times of the day don’t actually seem to speed up weight loss in people. However, the health benefits of a time-restricted diet could significantly increase people’s lifespan if they commit to it. It is recommended that no calorie intake occurs after the evening due to people being most active during the day.

A 2021 study of 6,400 people from age eight to up to age 95, in 29 countries, found that 1 year olds expend more calories than adults, but this trend does not continue throughout life. Energy expenditure levels are relatively stable from early adulthood to age 60 in both females and males, contrary to popular belief. After age 60, however, metabolism appears to decline significantly, leading to an increase in age-related diseases.

It seems the study has uncovered some good news for those with a slower metabolism – restricted calorie intake and eating at specific times may help offset some ill effects. This is supported by other research, which includes a study on mice from 2021 that found eating just one meal per day led to better use of fat stores for energy, lower blood sugar, and less frailty as the mice aged.

The team is looking into potential drugs or supplements that could mimic these dietary effects and improve longevity. One of the researchers is even following the lessons learned from the lab mice and restricting his eating schedule to just 12 hours per day. If they can discover a drug that can boost a person’s clock, they can test it in the lab and see if it would extend lifespan.