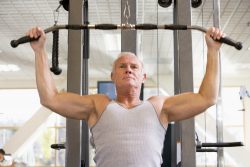 Dementia is a life altering disease and affects millions of people and their families worldwide negatively. But in a new study, researchers have found a modifiable factor that could possibly lower the risk of the advancement of this condition before it becomes irreversible. Their work highlights the link between muscle mass and rapid cognitive decline.

Little has been known about the association between low muscle strength and the development of dementia. For the first time, this new study shows that having low muscle mass is significantly linked to a rapid cognitive decline.

For the study, data was used from an ongoing Canadian Longitudinal Study on Aging or CLSA. It has collected a substantial dataset consisting of body composition and various cognitive tests from 30,000 persons over a 3-year period that was administered in person. Three domains were used in the study – executive function, memory and psychomotor speed. The participants were all over 65 years of age and were asked if having low muscle can predict eventual cognitive decline based upon the three domains.

The findings showed that having a low muscle mass did link with a more rapid decline in the domain of executive cognitive functions over a three year period compared with a normal muscle mass. The other domains of memory and psychomotor function loss were not affected. This is important because executive functions, on a daily basis, help a person stay attentive, make decisions and organize thoughts.

This is crucial information because muscle mass can be increased through exercise, especially resistance training. And combined with good nutrition and a sufficient amount of protein in the diet, muscle mass can be maintained over the years of a persons life. Muscles provide proteins that help handle various bodily processes as well as a major role in strength and physical functioning. They also deliver molecules to the brain. When a person exercises and builds muscle mass, more blood flow is delivered to the brain that helps the executive function process.

People can be measured for low muscle mass to help identify if they may have an increased risk of cognitive decline. But further research is needed to see if gaining or maintaining muscle can attenuate cognitive decline as a person ages, and, if so, what the mechanisms would be.

To view the original scientific study click below:
Association of Low Muscle Mass With Cognitive Function During a 3-Year Follow-up Among Adults Aged 65 to 86 Years in the Canadian Longitudinal Study on Aging