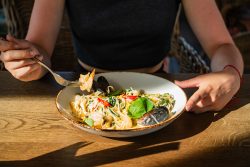 Researchers have developed a new method called untargeted metabolomics that identifies the large number of molecules that come from our food. Most of these molecules appear in our blood and stool and had previously been unknown. This method can provide a direct way to detect hundreds of thousands of molecules that may now be used to make a diet profile of individuals and provide clues as to health outcomes.

The scientists consisted of an international team that were able to match all metabolism products in a specimen to a vast database of samples. Where available, they used chemical inventories to provide a remarkable catalog of the signatures of molecules created by eating food or by processing in the gut.

The ability to determine how what we consume translates into byproducts and products of metabolism has important implications for the health of humans. The approach can be be used to get diet information scientifically and to understand the relationships to outcomes in the clinic. It is possible to link molecules in the diet to outcomes of health not per occurrence, but all at once which has previously not been possible.

Metabolomics consists of the comprehensive measuring of all the metabolites in a specimen that are biological. Metabolites are substances that are typically small molecules used or made when an organism breaks down drugs, food, and chemicals in the tissues. They are metabolism byproducts. In addition, the research used a relevant technique called metagenomics, which measures genetic material in samples that are biological and characterize microbes that are present.

Currently metabolomics research identifies only 10% of molecular features in specimen samples leaving 90% of the material to be unknown. The novel approach uses RDD, which is reference data driven analysis to match data from metabolomics that has been obtained from tandem mass spectrometry or MS/MS. This is an analytical tool which measures molecular weight utilizing two analyzers opposed to one against metadata annotated data that is a pseudo MS/MS reference library.

Eventually, every molecule is left without its electrons to charge it. The ion that is charged is weighted utilizing a scale that is very sensitive, then shattered into pieces and these pieces are weighed which creates a fingerprint that is unique for every molecule. These pieces of fragmentation spectra can be matched between the analyzed sample and a reference database. However, it has been a very challenging process until now.

This new research investigated thousands of foods that were assembled by people around the globe from an initiative launched 7 years ago by US San Diego called Global FoodOmics. The team has increased their data output more than five fold over techniques that were conventional. More notable was the new method allowed the untargeted metabbolomics to be utilized to infer the diet based on blood or stool samples.

It truly shows how crucial getting both clinical samples from people around the globe and food specimens are to be able to determine how microbes and molecules work together in order to degrade or improve health based on the foods we eat.

The study additionally suggests the way towards using RDD to explain the dark matter found in our metabolome. Not only in terms of the foods we eat, but in exposures to chemicals found in the clothes we wear, the medications taken, the beauty products we use and the environments people are exposed to. It will substantially help the team explore chemical connections throughout our world and ourselves.