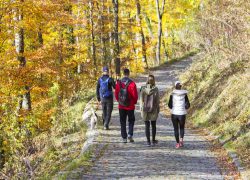 There is much we can do to slow down and even reserve the body’s trend to decline. A new long term study examined how changes in physical activity in post middle age affects mortality rates.

The study included 2,205 men who were surveyed from 1970 to 1973 at the age of 50. Each participant was categorized into groups that were based on their level of physical activity. The four groups were physical activity that was high, medium, low or sedentary. A follow up was conducted when the participants turned 60, 70, 72 and 82.

The results from the study were positive. As was expected, exercising more translated into lower mortality rates in each of the four groups. The participants who increased their activity levels between ages 50 to 60 were found to have the same mortality rate as those who had always maintained high levels of exercise.

The results were so pronounced, the mortality reductions were compared to people who stopped smoking. However, it is noted that low level exercisers needed to maintain regular physical activity for a minimum of 5 years to catch up. These findings confirm that we have the ability to reverse some damage that has been created in earlier years so as to become healthy as those who have maintained healthy lifestyle choices for a great portion of their lives.

The University of Pittsburgh team that conducted the study have quite possibly answered questions to the possibility of frailty not be inevitable as we age. Their have been recent studies showing that after reaching 40 we will typically lose 8% and more of our muscle mass with each decade. This accelerates after 70. These losses translate into less mobility, independence, strength and have been linked to early mortality.

Exercise on a regular basis may rewrite the future of our muscles. Little evidence for deterioration in older athletes musculature was found. The 70 to 80 year old athletes had just about as much thigh muscle as did the athletes in their 40s. They also showed minor if any fat infiltration.

These older athletes remained strong, although there did occur a drop off in leg muscle strength at around the age of 60. They might not have been quite as strong as those in their 50s, however the difference was small and very little additional decline followed.

The athletes aged 70 to 80 were found to be just about as strong as those in their 60s. This means that we do not have to lose muscle function and mass as we age. Changes that have been assumed to be due to the aging process and unstoppable, are actually related to sedentary and inactive lifestyles. This can be changed and intervened upon.

Those participants who had been sedentary but chose to become fit were able to cut their risk of heart attack by 75% to 80% over a 5 year period. According to the Harvard Alumni Health Study, vigorous activity can significantly lower the risk of coronary heart disease.

There is currently an increasing trend of people 60+ being on their way to being in better shape than the average 35 year old. If a person is exercising now, it doesn’t really matter if they are 25 or 85, they can double their strength in about 3 months and possibly double it again in an additional 3 months. Muscle growth in these older participants was found to be statistically equal to those of younger years doing the same degree of training. Strength and flexibility is not limited to the young. Percentage of body fat and aerobic capacity was found to be more related to training than age.

Additionally, exercise is known to be great for attitude, sex drive and appearance. It helps maintain hormone levels which decline with age. Exercise also increases lymph flow and metabolism as well as helping to increase DHEA while also reducing cortisol, the stress hormone.

Exercise can be aerobic cardio training or anaerobic weight/strength training. Resistance training and weight training can help wake up neural connections. Not only will this lead to improved strength and agility, but will also lead to better coordination.

It is important to note than anyone new to an exercise routine should consider consulting a personal trainer. These trained professionals can help design a program, keep their students motivated and on track, and also insure they are moving correctly to avoid injury.

The body was designed to move. Our bodies signal our cells to grow when we exercise. This creates a ripple effect and spreads growth processes to every cell in our body to help us function in a younger manner. On the other hand, sedentary muscles trickle chemicals which will signal cells to wither away. We can choose to be lazy and decay or choose to be active to help maintain a powerful body as we age. Based on the study, it is never too late to improve!