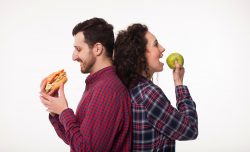 According to new research at Binghamton University, State University of New York, diet could be the key to improving brain health. The evidence suggests that just eating a healthy diet will not work for everyone. Lifestyle, diet, age and gender also need to be considered.

There are differences in people that mental health therapies need to consider. For instance, people between the ages of 18-29 and people over 30 years and men versus women have a different level of brain maturity.

The research team surveyed people to discover their food and dietary intake, the amount of exercise they get and other lifestyle habits between the different ages and genders. From 2014-2019 they surveyed over 2,600 people through a questionnaire on social media posts. The data was collected at different times of the year and they found significant contributors to mental distress, such as depression and anxiety, that related to diet and lifestyle.

There was found to be a difference in improved mental health among men in relation to their age. Young men tended to exercise frequently, consumed moderate amounts of dairy, high level of meat consumption, a low intake of caffeine and no fast food. The mental well-being of mature men consisted of a moderate consumption of nuts.

Because the human brain is still developing in the late 20’s, the team split the people surveyed into 2 age groups. For young adults of both genders, their diet quality impacts the developing brain. The brain is still building structures as well as forming new connections at this age, therefore, these people need more nutrients and energy for this. The result of a poor diet is a high degree of mental health distress in these young people.

Age also plays a factor in mental distress with high caffeine consumption in both genders. Caffeine can stay in the system for a long time stimulating nerves, contributing to anxiety and stress.

The team also found out that men and women differ to the way the brain is wired. Men’s brains tend to enable coordination and perception, while women’s brain supports intuition and analysis. These differences can affect nutritional needs. It was found that men are affected less by diet than women. If men eat a slightly more healthy diet they tend to have good mental health. Women, in all age groups, were found to need to be eating a lot of healthy food and exercising to have a positive mental health.