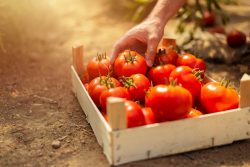 In a recent study, researchers found that eating a diet high in tomatoes over a two week period increased the diversity of gut microbes and altered bacteria toward an improved profile in young pigs. After observing the results with a short term intervention, the research team plans on moving into similar studies in people. The goal is that by looking at changes related specifically within the gut microbiome, we can see if any differences occur after consuming diets high or low in tomato content vs none at all.

Tomatoes are a popular vegetable, and research has shown that people who eat them tend to have less chronic health problems than those without. But what impact does consuming tomatoes really have on our guts? The new findings offer some insight into this mystery and show an avenue worth researching.

Microorganisms in our gut play an important role, but we still don’t fully understand their effects on human health. One way that research has tried to explore this question is by studying the link between dietary patterns and compositional differences among people’s guts by including food specific changes related specifically with certain foods like tomatoes. Ultimately they would like to see if there are any links between what type of bacteria someone gets through diet or other factors such as personal preference when it comes down how healthy they feel overall. The data shows us some interesting information about microbiome.

In this study, researchers compared the effects of feeding ten young pigs either an ordinary diet or one specially fine-tuned for them. The control group was given standard feed while those in the test group were fed food containing freeze dried tomatoes which are high in fiber and sugar but low on fat/calories content. They also took care not to interact too much with these animals during testing because it could potentially cause changes within their microbiome. Microbes in the pig’s guts were detected at both 7 and 14 days following their diets starting.

The study found that when pigs were fed a diet rich in tomatoes, their gut bacteria changed. The ratio between bacterial phyla Bacteroidetes to Bacillota, which has been linked with positive health outcomes, was higher during this time period compared to before when they were eating simpler foods such as grains or vegetables. Through their investigation, the researchers have characterized which microbes are present and how their relative abundance changed with tomato intervention.

The scientists want to learn more about how eating tomatoes changes our gut microbes and what this does for long-term health. They also aim on understanding the complex interplay between food intake, species diversity of bacteria in your body with additional research that could lead towards better dietary recommendations as well.