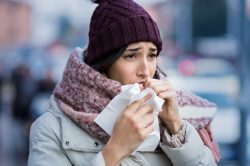 In what could be a groundbreaking development, researchers have uncovered an immune response within the nose that normally works to fight off viruses implicated in upper respiratory illnesses. However, when temperatures dip below certain levels this protective mechanism is weakened leaving us more susceptible to infections such as colds and flu. The findings may explain why these diseases are much more common during colder weather conditions.

Every winter, millions of people around the world come down with cold and flu-like symptoms. Many previously thought this was due to an increase in airborne viruses spreading indoors during cooler months, however, the latest study suggests a deeper biological cause. This finding has been backed up by current research into Covid-19 transmission which could revolutionize how we understand seasonal infections.

The nose stands as an impressive line of defense against disease-causing pathogens. Cells at the entrance of the nasal cavity detect any hostile microbes, and then sound off a warning signal which prompts billions of miniature liquid-filled sacs called extracellular vesicles (EVs) to swarm around these invaders. The EVs also transport antibacterial proteins through mucus along the airway, ultimately providing protection for other cells before they can reach further into the body.

For the study, the team sought to determine if this immune response was additionally triggered by viruses inhaled through the nose. This is the source of some of the most common upper respiratory infections.

Nasal tissue samples collected from participants undergoing surgery and healthy volunteers were analyzed by a team researching the common cold. They found that not one but three viruses – two rhinoviruses and a novel coronavirus – elicit an EV swarm response in nasal cells via different signaling pathways than those used to resist bacteria. Even more impressive was their discovery of how these EVs deploy receptors for the virus to bind itself onto instead of attacking human cells. The more of the decoys, the more the EVs can mop up the viruses in the mucus before the viruses had a chance to bind to the nasal cells which will suppress the infection.

Through a series of experiments, the team determined that cold temperatures are integral to understanding nasal immunity. By exposing healthy participants to 4.4°C for 15 minutes and later applying this reduction in temperature onto nose tissue samples, they found evidence of an impaired immune response. EV secretion decreased by about 42%, along with lowered levels antiviral proteins within those EVs. This data reveals how significant temp changes can be when evaluating nasal defense against viruses or other pathogens.

Seasonal variation in upper respiratory infections can now be understood at a more detailed level, thanks to the research findings. To build on this knowledge, additional studies will use challenge experiments involving humans and animal models to test how our nasal immune system reacts when exposed to viruses. Moreover, inspired by these discoveries, scientists are considering innovative therapeutics such as Nasal Sprays that could strengthen the nose’s innate immunity with an increased number of EVs or binding receptors within vesicles.

The research has uncovered an amazing immune defense system present in the nose, which faces constant bombardment. What we now need to uncover is how this natural phenomenon can be harnessed and used as a defense mechanism, particularly during winter when protection needs are greatest.