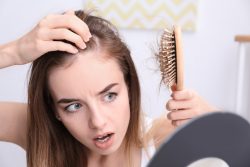 New research has identified a mechanism that appears to be able to prevent hair loss. A group of researchers in Helsinki and Cologne Germany have demonstrated that a protein known as Rictor holds a important role in the process.

Hair follicle stem cells promote hair growth and can also retain their life by changing their metabolic state. Environmental factors such as ultraviolet radiation damage skin and different tissues daily. The body continues to remove and renew the damaged tissues. Human sheds about 500,000,000 cells daily and an amount of hair weighing an amount of 1.5 grams.

Material that is dead is replaced through specialized stem cells that further growth of tissue. The function of tissues is reliant on the health and activity of these stem cells. Impaired activity will result in the aging of the tissues.

The part of stem cells and aging that is critical has been established, however not very much information is available about mechanisms that administer maintenance on a long term basis of these vital cells. The follicle of the hair which is well understood and has known identifiable stem cells is the prefect model system for researchers to study this question.

At the final stages of a hair follicle’s regenerative cycle and when a new hair is established, stem cells go back to their ideal location and maintain a quiescent state. The most important finding in the research team’s study is that the return to the stem cell state must have a change in the cell’s metabolic state. The cells switch from cellular respiration and glutamine based metabolism to glycolysis. This is a shift brought on by a signal that is induced by the Rictor protein in return to the concentration of low oxygen in the tissue. The study demonstrates that the absence of this protein influenced the stem cells reversal ability. This initiated a limited stem cell exhaustion and loss of hair due to aging.

The team’s creation of a genetic mouse model for the purpose of studying the Rictor protein. They observed that regeneration and cycle of the hair follicle were delayed quite significantly in mice who lacked the protein. Older mice suffering from a deficiency of this protein showed a limited decrease in their stem cell which resulted in hair loss.

Additional research will be conducted to investigate how the pre-clinical findings might be utilized in human stem cell biology and also lead to therapies with drugs that may protect the aging of hair follicles. The mechanisms found in the recent study might possibly be utilized in preventing loss of hair.

The team was most excited about their realization that the intent of a glutaminase inhibitor was able to bring back the function of the stem cells in the Rictor deficient mice. This proved the principle that by changing metabolic pathways, an important way to increase the regenerative amount of our tissues occurred.