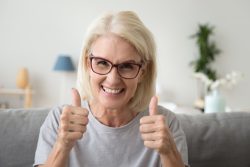 A new study has shown that people who are cheerful and feel enthusiastic or what is known as the “positive effect”, are not likely to experience decline in memory with aging. This study adds to a increasing body of research that shows the role a positive outlook has on aging.

Many of wish some of our memories could last a lifetime. However, emotional and physical factors can impact negatively our ability to remember information throughout a person’s life.

With each assessment the study participants identified a range of positive emotions they experienced during the previous 30 days. In the last two assessments, they also completed tests of memory performance. These tests involved participants recalling words immediately following their presentation and again 15 minutes later.

The team then examined the association between positive effect and memory decline. They accounted for gender, age, education, negative effect, depression and extroversion.

The findings indicated that memory did decline with age. However, participants with higher levels of positive effect declined less with their memory over the period of almost a decade.

Future research will look at addressing the pathways that could connect memory and positive effect such as social relationships and physical health.