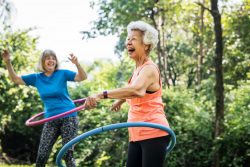 Recent research involving more than 30,000 heart patients has shown that becoming active in later life can be almost as beneficial to surviving as ongoing activity.

The findings which are very encouraging show how people with coronary heat disease could benefit by adopting or preserving a physically active way of life. The current research explored levels of activity over time and the relationship to death risk in people with heart disease.

Ongoing physical activity is recommended for people with heart disease. However, these recommendations are mostly based on research that used either an average of levels of activity looked at over time or a single assessment. However, people can modify the exercise amount they do, but it will remain unclear if these changes are related to their survival.

The meta-analysis involved 33,576 people with coronary heart disease from 9 long-term cohorts. The average age was 62.5 and 34% of them were females. The midian follow-up was at 7.2 years. Their activity was analyzed at baseline and a follow-up was used to validate questionnaires. The participants were then put in classes of inactive or active at 2 different time points (baseline and 7.2 years later). Definitions of inactive and active across the studies varied, however, they were in line for recommendations for healthy people with at a minimum of 150 minutes per week of activity that was moderate, or 75 minute per week of activity that was vigorous, or a combination of the two.

The research looked at the risks of death of all causes and death from cardiovascular disease according to the four groups that had been established. When compared to patients who were in the inactive group, the risk of death from all causes was 50% lower in the group who remained active over time, and 45% lower in the participants who had been inactive but then became active. It was 20% lower in those who were initially active but then became inactive.

The team says the results of their study show that continuing a lifestyle that is active throughout the years is linked with the longest longevity. However, people with heart disease are able to overcome earlier years of inactivity and, therefore, obtain surviving benefits through beginning an exercise program later in life. However, the benefits of this activity can be lost or weakened if the activity isn’t maintained. The findings show the benefits to people with heart disease of being active no matter their previous habits.