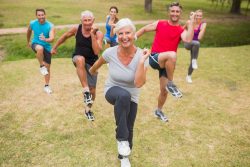 A recent study from the USC Leonard Davis School of Gerontology has shown that during exercise people express a strong hormone and that hormone when given to mice improves their physical capacity, performance and fitness. The research team’s findings have indicated new potential for addressing physical decline in humans during the aging process.

The study has revealed a detailed observation of how mitochondrial genome will encode instructions for regulating performance, physical capacity and metabolism that occurs with aging and may have the ability to increase a healthy lifespan.

Mitochondria are the energy source for cells. They also serve as the hub that coordinates and fine tunes metabolism through active communication throughout the body. As people age, this communication network appears to deteriorate. However, the recent research has suggested that it is possible to restore that communication network or refresh older mice so that they becomes just as fit as mice that are younger.

The team set out to look at the MOTS-c role. MOTS-c is one of a variety of newly identified hormones which mimic the results of exercise. This particular hormone is unique because rather than being encoded in the larger genome in the nucleus of a cell, it is encoded in the mitochondria’s small genome. This provides a brand new genome for targeting new interventions.

For the study, the team tested the affects of injecting MOTS-c in affected mice of a variety of ages through measuring physical performance and capacity in middle-aged mice (12 months of age), young mice (2 months of age) and older mice (22 months of age). The mice were given physical challenges which included running on a treadmill that accelerated and keeping their balance on a rod that rotated. All mice receiving the MOTS-c treatment and of all ages showed significant results of the challenges, scoring better than mice that were untreated and of all ages.

Interestingly, even the mice that were given a high-fat diet indicated significant physical improvements following MOTS-c injection and also showed less gain in weight that the untreated mice. The findings are similar to previous studies of MOTS-c injections in mice which also showed reversed age and diet dependent resistance to insulin and obesity due to an induced diet.

The team also saw significant physical improvements in MOTS-c treated older mice who were near the end of their life. The later life treatment showed improved gait, grip strength and physical performance which were all assessed through a walking test since a running test wasn’t possible for these older mice.

The mice who were older were equivalent to 65 years of age and older in humans. Once they were treated, their capacity on the treadmill was doubled and were also able to outperform the untreated, middle-aged cohorts.

In order to measure what effects exercise has on MOTS-c levels in humans, the team collected plasma and muscle tissue from the skeletons of young, healthy male participants who were instructed to exercise on stationary bicycles. The test samples were collected previous to the exercise, during the exercise period and following the exercise in addition to samples collected after a 4 hour resting period.

Levels of MOTS-c in muscle cells showed significant increases almost 12-fold following exercise and stayed partially elevated following the four hour resting period. Additionally, levels of MOTS-c in the blood plasma increased by about 50% both after and during exercise returning to baseline following the 4 hour rest. These results indicate that exercise in and of itself was the factor which prompted the expression of mitochondrial encoded managed peptides.

As a result of the studies in mice and the MOTS-c expression during exercise in people, there is support of the idea that the aging process is regulated by genes in nuclear and mitochondrial genomes. Although additional research is needed in regard to MOTS-c, the current data has indicated that treatments with MOTS-c might increase healthy lifespans in humans and additionally address a variety of age related diseases and conditions such as frailty.

The team has indicated that their findings from the MOTS-c injections in mice are quite promising for eventual translation into people. This is especially promising given the findings were the result of treatments in the mice beginning at an older age.

Reduced walking capacity and reduced stride length are indicators of declines in human physical performance and are greatly associated with morbidity and mortality in humans. Interventions that can target age related frailty and decline which can be applied in later life could be more feasible when compared to treatments for a lifetime.

MOTS-c is an exercise-induced mitochondrial-encoded regulator of age-dependent physical decline and muscle homeostasis.