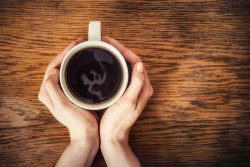 Caffeine in energy drinks, cola or coffee is the globe’s most extensively consumed substance that is considered psychoactive. New research has just shown that consuming caffeine on a regular basis can alter the brain’s gray matter. The effect does appear to be temporary, however.

A research team at the University of Basel and the Psychiatric Hospital at the University, set out to investigate if consuming caffeine regularly can affect the brain’s structure because of poor sleep. Caffeine enables people to feel extra alert. It can however, disrupt sleep when consumed at later hours in the day. Sleep deprivation can affect the brain’s gray matter as previous research has shown.

The results of the research was surprising to the team. The caffeine which had been consumed for the study did not show results of poor sleep. However, the team did observe some changes in the brain’s gray matter. Gray matter is part of the central nervous system which is mostly made up of the cell bodies of nerve cells. White matter in the brain mostly comprises neural pathways which are long extensions of these nerve cells.

Following each of the 10 day periods, the team examined each participant’s volume of their gray matter through brain scans. They additionally examined the sleep quality in the sleep lab of each participant through recording the electrical activity of their brain.

At the end of the 10 day period when the participant’s were given the placebo or “caffeine abstinence”, the gray matter’s volume was greater than after the same 10 day period that included the caffeine tablets.

The team noted that the difference was especially noteworthy in the right medial temporal lobe and including the hippocampus which is the part of the brain that is necessary for memory consolidation. The team believes their results don’t necessarily indicate that consuming caffeine results in an impact that is negative on the brain. However, consuming caffeine daily does affect the cognitive hardware.

Even though caffeine appears to decrease gray matter’s volume, following just 10 days of not drinking caffeine it appeared to regenerate significantly in the participants. The changes appear to be temporary in brain morphology, however systematically comparing coffee drinks with people who typically consume no caffeine or little, has been lacking to date.