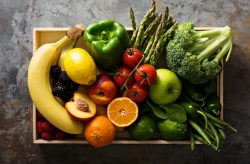 A large study conducted by scientists at Harvard University has shown that the “five a day” rule for consuming 5 servings of fruits and vegetables each day can lower risk of death. The maximum benefit of 3 servings of veggies and 2 servings of fruit each day may be the optimal combination and amount for longer life, and consuming more than that of either was not shown to be linked to any better longevity.

The findings do support the U.S. diet recommendations to consume more vegetables and fruits with the simple message of 5 per day. In America just 1 in 10 people actually consume 3 servings of veggies and 2 servings of fruit on a daily basis. The average person in American consumes just 1.5 servings of veggies per day and just one serving of fruit per day.

The research team followed and analyzed data from the Health Professionals Follow-up Study and the Nurse’s Health Study. These 2 studies included over 100,000 adults whom of which were tracked for over 3 decades. The data sets from both studies included very detailed dietary information which was repeatedly obtained every two to four years. For the analysis, the team pooled data on vegetable and fruit intake and also death obtained from 26 studies which included 29 territories and countries which included South and North America, Africa, Europe, Australia and Asia and close to 1.9 million participants.

The analysis of all of the studies including a composite of over 2 million participants showed the following:

Consumption of about 5 servings of vegetables and fruits daily was linked to a lower risk of death with more than that not showing any extra benefit.

Not all foods that might be considered vegetables and fruits showed the same benefits. Starchy veggies such as corn and potatoes and peas were not linked to the reduced risk of death due to all causes or any specific diseases which are typically chronic.

Green leafy vegetables such as lettuce, kale, and spinach and vegetables and fruits which are rich in Vitamin C and Beta Carotene such as carrots, berries and citrus fruits indicated benefits.

To confirm their findings, the team conducted a meta-analysis of 26 additional studies which involved two million participants. The findings were found to be similar with the largest reduction in death happening at the five per day mark. The results in U. S. women and men showed results similar to those from 26 around the world. The indicates the biological plausibility of the team’s findings and also has suggested that the findings can be applied to more populations.

There is a limitation to the analysis since it is an observational study with dietary data being self-reported and might be inaccurate therefore causation cannot be proved. However, the study does provide large support for the idea that consuming more veggies and fruits is good for people.

To view the original scientific study click below:
Fruit and Vegetable Intake and Mortality: Results From 2 Prospective Cohort Studies of US Men and Women and a Meta-Analysis of 26 Cohort Studies