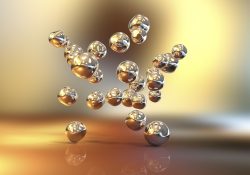 Researchers at the University of Southampton have succeeded in the development of a novel method of using nanomaterials to not only identify but also enrich stem cells found in the skeletal system which can potentially lead to the development of new treatments for repair of damaged or lost bone and serious bone fractures.

Working as a team, chemists, physicists and tissue engineering experts employed uniquely designed gold nanoparticles to look for very specific stem cells in bone. They created a fluorescent glow which revealed the stem cells presence around other stem cell types and permitted them to be enriched or isolated.

This new technique is quicker and simpler than other methods and close to 50 to 500 times more successful at enriching the stem cells.

The team used gold nanoparticles which are tiny particles that are composed of gold atoms, coated with oligonucleotides which are strands of DNA to optically sense specific signatures of messenger RNA of skeletal stem cells found in bone marrow. Under a microscope, when the stem cells are detected, the nanoparticles will release a fluorescent dye which makes these stem cells distinguishable from cells in the same area. These stem cells can now be separated through the use of a state of the art fluorescence cell sorting process.

Through identifying stem cells found in the skeletal system, scientists have the ability to grow the cells in pre-identified conditions which enables the formation and growth of cartilage tissue and bone, as an example to help heal broken bones.

Due to challenges involved with an aging population, the need for both cost effective and novel methods of bone repair are needed. One in five men ad one in three women are at risk of osteoporotic fractures throughout the world and costs are significant.

The team has been researching stem cell based therapies for bone over the past 15 years in an effort to understand the development of bone tissue and how to generate cartilage and bone. At the same time another group had been designing novel nanomaterials and also studying applications of the material in the fields of energy and biomedical sciences. The new study brings both the disciplines together and is an example of the impact interdisciplinary and collaborative work an achieve.v

Some of the most promising and exciting areas for bone regenerative medicine and bone disease treatment for the aging population is skeletal stem cell formed therapies. The latest studies have harnessed distinctive DNA sequences from targets which the team believes can enrich skeletal stem cells. And by using Fluorescence Activated Cell Sorting (FACS), they have achieved enriching stem cells from bone in patients. The identification of distinctive markers is known as the holy grail in bone stem cell biology. And while there is a ways to go, the studies have produced a marked change in researcher’s ability to identify and target bone stem cells in humans and the optimistic therapeutics that lie within.

The correct material design is important to their application to complex systems. By customizing the nanoparticles chemistry, they programmed specific functions within the design. They designed nanoparticles which were coated with short DNA sequences which were able to sense specific RNA in skeletal stem cells. Combined with advanced FACS gating strategies, this enabled the sorting of the cells that are relevant to human bone marrow.

The team are now applying the sequencing of single cell RNA to the platform technology that was developed with all the partners. They have proposed to then move forward with clinical applications with preclinical bone formation studies in order to produce proof of concept studies.