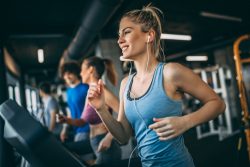 Physiologists have found that the greatest predictors of men’s and women’s abilities to burn fat are their fitness level and their biological age. A team of sports nutritionists have conducted new research that has shown that women who are healthy and fit are likely to burn more fat when exercising than men.

It is important to people how their body burns fat for insulin sensitivity, great metabolic health, and for reducing the risk of Type II diabetes. However, for endurance type sports competitions like cycling or running, how our body will burn fat can be the difference between failure and success.

Earlier research from the current team has shown how the body’s carbohydrates of athletes competing in distance events deplete stores quickly while exercising. This shows that athlete’s abilities to tap into fat reserves to continue to fuel them forward becomes necessary to their individual performance.

The initial study included 73 healthy adults who were 19-63 and included 32 women and 41 women. The study tested the biological factors for ideal fat burning and lifestyle through asking the participants to participate in a fitness test utilizing a bicycle and measuring all key indicators.

The results discovered that women and of them those who were most physically fit across the age ranges, burned fat more efficiently during exercise.

The second study then took the first stage further to look at what molecular factors in our fat tissue and muscles determine exactly how fat is burned. This test involved the team taking muscle and fat biopsies from the participants for analyzing how the differences in proteins in muscle tissue and fat could affect the ability to burn fat.

The team discovered that proteins found in muscle which are part of the process of breaking down stored fat into smaller fatty acids, and additionally proteins which are part of transporting the fatty acids into the mitochondria in muscle which are the cell’s powerhouse, regularly were linked to a greater ability for fat burning. However, the molecular factors looked at did not indicate why women burned more fat than the males in the study.

The team’s analysis shows that women typically have a larger reliance on fat for fuel while exercising than men. Through understanding what mechanisms are behind the differences in use of fuel between the sexes might help in explaining why women seem to have a metabolic advantage to insulin sensitivity which is a vital indicator of metabolic health.

Managing weight is mostly about a balance in energy. In order to lose weight a person needs to consume fewer calories than what is expended through physical activity and resting metabolism. People who have an increased ability to burn fat for fuel however, appear to be a bit protected from future weight gain which could be associated to how burning fat affects energy expenditure and food intake.

To view the original scientific studies click below:
Resting skeletal muscle ATGL and CPT1b are associated with peak fat oxidation rates in men and women but do not explain observed sex/differences
Determinants of Peak Fat Oxidation Rates During Cycling in Healthy Men and Women