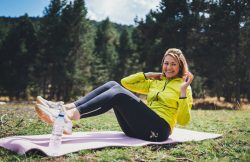 A new study has reported a clear association between low cardio-respiratory fitness and muscle strength and the risks of developing symptoms of anxiety, depression or both. The study which included over 150,000 participants, may help with clinical guidance on physical fitness and mental health.

Mental health problems just like issues involving physical health, can profoundly effect a person’s everyday life. Some common mental health problems are depression and anxiety. The Anxiety and Depression Association of America indicates that 18.1% of adults in America develop an anxiety disorder sometime in the past year. The National Institute of Mental Health notes that 7.1% of American adults have experienced a significant episode of depression.

There is a large body of evidence showing that being active physically can help treat or prevent conditions related to mental health. However, there are still many questions that need to be answered. As an example, what types of measures should be used to quantify physical activity? And how can it help prevent issues with mental health or help with improving someone’s mental health? Also, is it possible to show a causal association between mental health getting better and physical activity?

The importance of having detailed evidence of the link between mental health and physical activity in addition to the mechanisms that could underlie it, is vitally important to clinicians who can suggest targeted guidance to individuals who suffer from mental health conditions.

As part of the study, the researchers analyzed an existing data set that enabled them to add onto their understanding of the link between mental health and physical activity. The data was drawn from the U.K. Biobank which is a data repository which included information from over half a million volunteers age 40 to 69 from Scotland, Wales and England. From August 2009 to December 2010, a subset from the Biobank consisting of 152,978 people participated in a variety of tests to measure their fitness.

The team assessed the cardio-respiratory fitness of the participants through monitoring their heart rate before, during and following a six minute sub-maximal exercise test conducted on stationary bicycles. The volunteer’s grip strengths were also measured which was used as a proxy for muscle strength.

They also studied the separate correlations between cardio-respiratory fitness and mental health, and muscle strength and mental health. They discovered that each fitness measure was individually linked with a change in risk but less significantly so with the combination of measures.

This further evidence indicated there is a relationship between mental health and fitness and that structured exercise which is aimed at improving different types of fitness is good for both physical health and mental health.

Although the study is a robust one with a long follow-up period and objective measures of the risk factor and the outcome, it does not necessarily mean there is a casual relationship between physical and mental health. It might be that people who have better mental health tend to stay physically active.

Nonetheless, the team deployed a variety of statistical techniques that does suggest that it is likely there is a causal relationship between physical fitness and improved mental health. In addition to the adjustments for confounding factors, the team also conducted a variety of sensitivity analyses.

They looked for reverse causation which is when the outcome is actually the cause through excluding participants who were anxious or depressed at the beginning of the study. They also changed the cut-off values which would determine whether participants had depression and neither of these two analyses changed any of the team’s findings.

There is the need now to demonstrate what the mechanisms are that account for the relationship between fitness and mental health. However, the current findings are still important. The team notes that people can make a meaningful improvement in their physical fitness in just 3 weeks. And based on that period, a person may be able to reduce their risk of developing common mental health conditions by op to 32.5%.

Individual and combined associations between cardiorespiratory fitness and grip strength with common mental disorders: a prospective cohort study in the UK Biobank