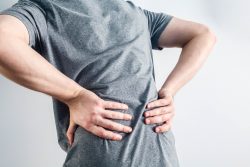 Degeneration of the intervertebral disc is a very common problem which afflicts a large group of our population. Both neck and back pain are very often the result of progressive damage of the discs which separate our spinal vertebrae.

Healthy intervertebral discs work by absorbing stress which has occurred on the spine during movement. They then adjust our posture so we can move freely. If the discs wear out, pain develops in a variety of areas in a person’s neck and/or back.

Currently treatments for this disc degeneration have included replacing the damaged discs with new artificial ones or spinal fusion surgery. These approaches unfortunately have limited benefits because they cannot replace the full function of the discs they replace.

Now a research team at the University of Pennsylvania’s Perelman School of Medicine, School of Veterinary Medicine and the School of Engineering and Applied Science are aiming to solve this problem. They are working on developing bioengineered intervertebral discs which are harvested and made out of a person’s own stem cells. Because stem cells are undifferentiated cells which have the ability to transform into specialized cells, they are the focus of a variety of medical research studies.

For the past 15 years the team at the University of Pennsylvania has been working on these new disc models beginning with lab studies, then progressing to studies on small animals, and now recently studies on large animals.

Previously the team tested the new discs which they call disc like angle ply structures (DAPS) for 5 weeks in rat tails. In the next study, the research team further developed the engineered discs. The new model called endplate modified DAPS (eDAPS)were tested in the rats once again for up to 20 weeks. The new structure allowed the disc to retain its shape better and was more easily integrated in the surrounding tissue.

Several tests were run which included MRI scans and a variety of in depth tissue and mechanical analysis. The team discovered that in the rat model the eDAPS effectively restored the original disc function and structure.

With this success, the team was motivated to study eDAPS in goats. They proceeded to implant the device within the cervical spines of some of the goats. Goats were chosen for the study because the cervical spine discs of these animals have similar dimensions of those in humans. Goats also have semi upright stature which allowed the team to bring this study one step closer to conducting human trials.

The teams tests on goats proved to be successful. The eDAPS integrated quite well with the surrounding tissue. Additionally, the mechanic function of the discs either matched or surpassed that of the original cervical discs of the goats.

The next step will involve conducting more extensive trials on goats which will help the scientists to better understand how well eDAPS works. The team then plans to test eDAPS in human models of intervertebral disc degeneration which hopefully gets them one step closer to conducting clinical trials.

Implanting a device made of a person’s own cells is highly desirable. Using a true tissue engineered motion preserving replacement device in arthroplasty is something that has not been done yet in orthopedics. It would certainly be a large shift in treating spinal diseases and how surgeons approach motion sparing reconstruction of joints.