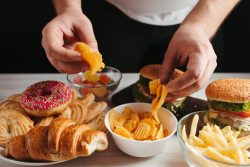 As with any sugar, when consumed in excessive amounts, fructose can be harmful. According to research done by USDA scientists back in 2008, Americans consume about 50 pounds worth every year. When eaten in such large quantities it can cause problems such as weight gain, insulin resistance, type 2 diabetes, and a host of other health problems.

The primary ways we come into contact with fructose is through either sucrose or high-fructose corn syrup. Pasteurized fruit juices also contain a fair amount of this sugar, but regularly even pasteurized fruits are being adulterated by adding more sugars. High Fructose Corn Syrup is not considered biologically similar to sucrose, because it has a glycosidic bond linking fructose and glucose together slowing its breakdown. The recent endeavor by HFCS industry members in hopes of re-labeling their product to “corn sugar” has been denied by the FDA.

Fructose is actually quite similar to alcohol, considering it can stimulate production of dopamine in our brain and shares metabolic pathways. Their similarities are easier to understand when you consider that fructose can be made into ethanol by adding yeast for making alcoholic beverages. These two carbohydrates share a variety of commonalities, including increasing rates in obesity. The result has been called metabolic syndrome or type 2 diabetes on occasion if left untreated for long periods of time.

Fructose seems to have an especially close parallel with alcoholism because both can lead someone into addiction without their knowledge while also fueling factors behind major health issues such as inflammation. The liver has trouble processing it, so you get insulin resistance and inflammation from drinking too much fructose-based soda or juice.

While it’s hard to believe that something as seemingly harmless and natural can have such a detrimental effect on our brain, recent research has shown us just how connected what we eat is with psychological health. One way this link manifests itself in an individual’s life is through aggressive behavior patterns. More specifically, those who consume high quantities of fructose or alcohol regularly appear more likely than others toward acts involving anger management problems.

There are many reasons why avoiding added sugars is important. One of the most compelling being that it may be a sign you need to look for what else your craving could mean in order get at those emotions or needs deeper than just sweets which would make them go away quicker. You can also use natural substitutes like xylitol and stevia instead without sacrificing taste while still enjoying sweet things now and then. Fructose has been shown time after time as an addiction trigger.

The adverse effects of isolated fructose on human health are becoming more apparent, but the “hidden damage” done by HFCS-based sugars to environmental and planetary sustainability may be even worse. This is because most genetically modified corn used for production of this type sweetener comes from harmful pesticides like glyphosate or gene products able to transfer horizontally, in order to create an ever increasing market demand through cheaper prices.

When you eat a lot of sugar, your body has to work hard just so that it can process the food and use up all those extra calories. The byproducts from this energy investment are potentially harmful narcotic properties that could explain why we consume such vast quantities. Researchers are currently investigating what natural substances reduce or eliminate the detrimental effects of this harmful ingredient to better understand how it may be affecting us negatively.

To view the original scientific study click below:
Fructose: metabolic, hedonic, and societal parallels with ethanol