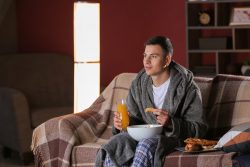 Midnight meals might be a bad idea for your health. A recent study provided experimental evidence that eating late decreases expenditure of energy, increased hunger and changes in fat tissue that combined might increase obesity risk.

The connection between diet and health has been well established. The study found that when we eat impacts our appetite for food as well as how much energy expenditure occurs afterwards, which can lead up to an obese state if left unchecked. In the U.S. 42% of the adult population is considered obese which can lead to the onset of diseases such as cancer and diabetes. It was discovered that the time we eat greatly affects our energy expenditure, appetite and molecular pathways to adipose tissue.

The scientists were interested in testing whether eating late at night could be linked with an increased risk of becoming obese. They found that when subjects ate their evening meal four hours after bedtime, not only did it affect how many calories they burned during digestion and absorption but also hunger levels and where those fats were stored on the body.

To study the effects of what times eating schedules have on weight loss, 16 participants that were considered to be obese or overweight were tracked and were assigned to one of two groups. One group had strict early morning meal times and the other with more flexible schedules. Each person maintained a fixed wake/sleep rhythm for 2-3 weeks before entering laboratory protocols while also following identical diets at home during this time period as well.

The study involved several aspects of human behavior that have never been documented before. During the lab, participants kept records on their appetite and hunger while giving blood samples at various times each day. This was to measure how different types of fuels affected pathways in our bodies in relation to storing fat. Biopsies were taken from a portion of the participants during lab testing in both the late and early eating protocols in order to enable comparison of levels and patterns of gene expression between the two eating conditions.

Results showed that when people eat later in their day, they have lower levels of appetite-regulating hormones like ghrelin and leptin. Primarily, levels of the leptin hormone which signals a person is full, were lowered across the 24 hour period in the evening eating condition compared to the earlier eating conditions. When the participants ate later in the day, they burned calories slower and showed adipose tissue gene expression towards increased adipogenesis and decreased lipolysis, which promotes fat growth. Noteworthy, these finds convey converging molecular mechanisms and physiological mechanisms that underly the correlation between eating late and an increase in obesity risk.

The researchers found that when participants ate their last meal at night, it altered how the body used energy. The results are not only consistent with a large body of research which suggests eating later may increase your likelihood for becoming obese but it also sheds new light on why this happens. Through using an innovative study design and tightly controlling environmental factors like posture while behavioral patterns such as physical activity or light exposure were kept under control they could measure changes during each phase.

In the teams future studies, they plan to find more women to participate and increase the generalization of their findings to a greater population. While the study cohort only included 5 women participants, the study had been set up to control for menstrual time, reducing confounding variables but it made recruitment for women more difficult. They also are interested in better understanding the effects of the relationship between bedtime and meal time on energy balance.

The study shows the effects of early versus late eating, The team isolated these effects through controlling confounding variable such as sleep, physical activity, caloric intake and light exposure, but in actual life many of these factors may be influenced by the timing of meals. In larger scale studies, where rigid control of these factors may not be feasible, the team must consider how environmental and behavioral conditions alter biological pathways which underlay risk of obesity.