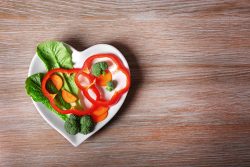 A new study confirms health benefits of moderate calorie restriction in people and identified a key protein that might be utilized to extend human health. Previous research has shown that restricting calorie intake by worms, mice and flies can enhance the span of life in lab conditions. However, whether calorie restriction is able to do the same for humans has remained unclear.

This was the first controlled study of restricting calories in healthy humans and the research was based on the clinical study CALERIE (Comprehensive Assessment of Long Term Effects of Reducing Intake of Energy).

The researchers first created a baseline of calories consumed for over 200 participants. They asked a portion of the participants to reduce calories by 14% while the remaining participants continued to eat as normal. The long term effects to their health were analyzed for 2 years.

In humans chronic low grade inflammation is a significant trigger of a variety of chronic diseases, therefore having an adverse effect on life span. They wanted to answer what does restricting calories do to the metabolic and immune systems. If it is beneficial, then how do we control the endogenous pathways that copy its effects in humans?

The team began by analyzing the thymus gland which is located above the heart and produces T cells. T cells are a crucial part of our immune system as they are a type of white blood cell. This gland will age faster than other organs, and as it ages it produces fewer T cells. When healthy adults are around 40 years old, 70% of this gland is already nonfunctional and fatty. As we age, we begin to feel the absence of brand new T cells as the ones we have left are not good at fighting new pathogens. This is one of the reasons older people are at a greater risk for illnesses.

The team was amazed that the thymus gland can be rejuvenated noting that there is hardly any evidence of it occurring in humans. This dynamic effect on this gland had the team expecting to also discover changes to the immune cells that the gland was producing. If so, then there could be underlying overall benefits of restricting calories. However, when they sequenced the genes in these cells, they discovered there were not any changes in gene expression after the two year period.

This observation had the team look closer which showed a surprising discovery – it turned out the action was really in the tissue miscroenvironment and not the blood T cells.

The team had studied adipose tissue which is body fat of the participants on the calorie restricted diet at three different points – the beginning, at one year and at the 2 year end of the study. Body fat is essential as it delivers a strong immune system. The are a variety of immune cells that occur in fat and when they are atypically activated they turn into a source of inflammation.

The team discovered amazing changes in the gene expression of adipose tissue at one year that were sustained to two years. This showed some genes were involved in the extension of life in animals and also unique restriction mimicking of calorie targets that could improve anti-inflammatory and metabolic responses in people.

The team then set out to observe if any genes they had identified in the analysis could be driving some of the benefits of restricting calories. They looked at the gene for PLA2G7 which is one of the genes that was significantly inhibited after restricting calories. PLA2G7 is a protein that is produced by immune cells that are known as macrophages.

The change in PLA2G7 gene expression that was observed in the participants who limited their calories suggested the protein could be linked to the effects of restricting calories. The team also tracked what would happen when the protein was reduced in mice in a lab.

They discovered that reducing the protein in mice yielded similar benefits that were seen in the participants on the calorie restricted diet. The thymus gland of the mice was functional for a longer period. They were protected from weight gain due to diet and were also protected from inflammation due to the aging process.

The effects occurred due to PLA2G7 targeting a specific mechanism of inflammation known as NLRP3. Lowering PLA2G7 protected the older mice from inflammation.

The findings show that PLA2G7 is a driver of the effects of restricting calories. The identification of these drivers helps the team determine how the immune system and the metabolic system speak to each other. This can point to potential targets which can improve function of the immune system and reduce inflammation and possibly enhance a healthy lifespan.

For example, it could be possible to manipulate PLA2G7 and receive the benefits of restricting calories without having to actuall restrict calories which can be harmful for some humans.

CALERIE is a controlled study that indicated that a simple restriction of calories with no specific diet, has a significant effect of shifting the immuno-metabolic state in a direction that protects human health. It gives great hope.