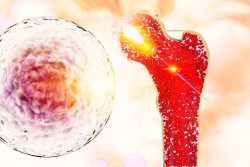 A new study has discovered a way to regrow or replace bone that has been lost by using high frequency sound waves. Researchers from RMIT University showed how this could be done faster and more efficiently than any process now in use.

Currently the process of changing adult stem cells into bone cells has been complicated and used expensive equipment. This hindered it being used in mass production thus making its use unrealistic. And the small amount of clinical trials that attempted to regrow bone were a painful procedure for the patient. They involved collecting mesenchymal stem cells which primarily reside in bone marrow and converting these into bone cells.

In the study, adult stem cells were treated with a microchip that produced MHz-order high frequency sound waves. This quickly and efficiently turned them into bone cells. They found they could direct the sound waves to the right places with the amount of pressure needed to trigger the process. This new approach doesn’t require any special drugs and is very easy to do. It also cuts the amount of treatment time by several days.

This is extremely important for effective tissue engineering. It is cheap and simple to use and can easily be upscaled to treat a large amount of cells simultaneously. This approach has great potential in the use of treating stem cells before they are coated onto an implant or injected directly into the site of disease or an injury. Once they have started the process of changing into bone cells they can be used to regrow new bone.

These mesencymal stem cells can also be obtained from fat tissue and other areas of a patient’s body instead of bone marrow which is a less invasive procedure. They found the best procedure was to expose cells to 10-MHz signals for ten minutes a day for five days.

More research is needed to be able to scale up the procedure for practical use.