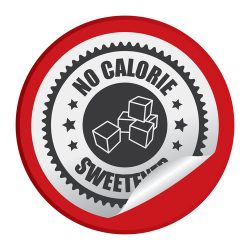 In addition to common artificial sweeteners shown to change how the body processes fat and energy, a new study has revealed they can also cause health changes that are linked to obesity and diabetes. Because of the increased awareness of the health consequences associated with eating too much sugar, a dramatic increase in the consumption of zero calorie artificial sweeteners has occurred.

Artificial sweeteners are one of the most common food additives and are frequently consumed in diet and zero calorie beverages and other food products. The recent study is the largest examination to date which tracks biochemical changes in the body. Previous studies linked artificial sweeteners with negative health consequences; however the research had been mixed and raised questions about potential bias related to study sponsorship. The new study used an approach known as unbiased high throughout metabolomics after consumption of sugar and sugar substitutes. The tests were conducted in rats and cell cultures, and the researchers also looked at impacts on vascular health by studying how the substances affect the lining of blood vessels.

The research included feeding different groups of rats diets high in glucose or fructose, or aspartame or acesulfame (zero calorie artificial sweeteners). At the end of three weeks the researchers saw significant differences in the concentrations of fat, amino acids and biochemicals in blood samples. The results suggest that artificial sweeteners change how the body processes fat and gets its energy. They also found that acesulfame potassium appeared to accumulate in the blood with higher concentrations having a more harmful effect on the cells that line the blood vessels.

The researchers noted that in moderation the body can handle sugar. But when the system is overloaded over a long period the body machinery breaks down. They observed that replacing those sugars with the zero caloric artificial sweeteners led to negative changes in energy and fat metabolism.

The researchers note that the results do not provide a clear answer and further study is needed. But the question becomes, which is worse between sugar or artificial sweeteners? It is well known that high dietary consumption of sugar is related to negative health outcomes. The recent study suggests that the artificial sweeteners do too. If people chronically consume the foreign substances as with sugar also, the risk of health problems such as obesity and diabetes increases.