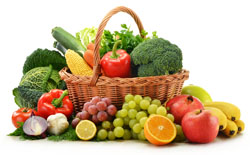 A new study conducted by the University of Otago has revealed that fruits and vegetables consumed in their natural state promote better?brain health. The study which was published in Frontiers in Psychology found that for mental health in particular these food items in their ?unmodified? state retained more of their nutrients as opposed to consuming them cooked or canned.

A total of 400 young adults aged 18 to 25 from the United States and New Zealand participated in the study. This age group was chosen as they typically have the lowest vegetable and fruit consumption of all age groups and are additionally are at high risk for mental health disorders. The individual?s typical consumption of raw fruits and vegetables vs. cooked or canned were assessed. Their positive and negative mental health, lifestyle and demographic variables that could affect the association between vegetable and fruit intake were also taken into consideration such as health styles including sleep, exercise, unhealthy diet, chronic health conditions, ethnicity, gender and socioeconomic status.

An earlier study conducted by the University of Warwick?s Medical School which stressed the importance of consuming 5 or more fruits and vegetables per day, found that 33.5% of participants with high mental health wellbeing consumed at least that many servings per day. This compared to only 6.8% who ate less than one portion per day. This study did not focus on how the fruits and vegetables were consumed (fresh vs. cooked or canned), but additionally supports the findings of the importance of consuming 5 or more portions per day of these nutrient dense foods. This study found that along with smoking, fruit and vegetable consumption was the health-related behavior most consistently associated with high and low mental wellbeing. Both studies show that consuming fruits and vegetables may plan a potential role as a driver of not only better physical health, but also of mental wellbeing.