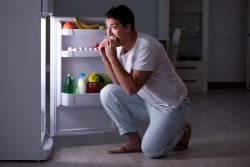 Every day we all make decisions about what we consume, however our choices might not be totally our own. Research on mice has shown that the microbes in their guts have an influence on what they choose to eat, creating substances that will prompt urges for a variety of foods.

Everyone has urges for certain foods like really needing to eat a salad or some meat. The team’s work has shown that mice with different varieties of microbes in the gut choose different foods.

Although it has long been speculated by researchers as to whether microbes can influence what we prefer to eat, the thought has not been tested directly on animals larger that a fruit fly. Investigating this, 30 mice that had a lack of gut microbes were given a combination of microorganisms coming from 3 species of wild rodents that had contrasting natural diets.

They discovered that each group of mice had chosen foods flush in a variety of different nutrients which showed that their microbiome had changed what they preferred to eat.

While the thought that microbiome can affect a person’s behavior may appear somewhat far fetched, it wasn’t a surprise for the team. Our gut and our brain are in ongoing contact, with particular kinds of molecules acting as mediators. Byproducts from digestion signal that you have consumed enough food or that maybe you need certain types of nutrients. However, microbes can emit some of these same molecules, possibly hijacking lines of communication which can change the meaning of their message benefitting themselves.

For example, one messenger might be needing a nap following a turkey dinner due to its content of tryptophan. This is an essential amino acid that is found in turkey, however it is also formed by microbes in the gut. It travels to the brain and is transformed into serotonin which sends an important signal for feeling satisfied following a meal. It then eventually becomes converted into melatonin making you sleepy.

From this study, it was shown that the mice that had contrasting microbiomes also had varying levels of tryptophan in their blood. This was before they had the choice to choose a different diet. Those with more of this molecule in their blood also showed more bacteria that could produce it in their gut.

Tryptophan is only one thread of what is a complicated web of chemical communication. There are most likely dozens of signals that influence eating behavior day to day. Tryptophan which is produced by microbes might be one aspect of that. However, it does establish a credible way that microscopic organisms can alter what we prefer to eat. This is one of a few rigorous experiments showing such a link between the brain and the gut despite quite a few years of theorizing by researchers.

There is still more science that needs to be done before a person should begin distrusting their cravings for certain foods. Without a way to test the idea on humans, the researchers could not measure the significance of microbes in determining diet when compared to anything else.

It might be that what a person has eaten the day before is more significant than just the microbes they have. People have a lot more going on that can’t be ignored in the team’s experiment.

It is just one behavior that microbes might be tweaking without our knowledge. The field is young and there is a lot still to learn. The team is just amazed at the role they are finding that microbes play in animal and human biology.

Lack of Sleep Can Disrupt Activity in Cornea Stem Cells

Breathing is the Master Clock of the Sleeping Brain