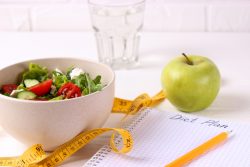 Standard scientific opinion has blamed weight gain on an excess of calories which is due to burning fewer than taken in. In opposition to this viewpoint, the carbohydrate-insulin model shows that the quality of diet matters more than calorie intake for weight loss. The model’s position is that eating processed carbohydrates and starchy foods leads to changes in hormone and insulin levels which results in an increase in fat deposition.

The increase in fat storage leads to hunger and the consumption of more foods rich in calories which then leads to obesity. This model has suggested that staying away from starchy and sugar rich foods might be necessary for losing weight instead of calorie restriction.

The WHO says that the worldwide prevalence of obesity and overweight has increased during the past 10 decades. There is an important consensus in the scientific community that the easy availability of these detrimental foods and also a sedentary lifestyles have contributed to the increase in obesity rates. However, there is a lot of disagreement as to how these environmental factors contribute to the problem.

According to the predominant EBM (energy balance model) eating more calories than those that are burned will result in weight gain due to a positive energy balance. The EBM has suggested that successful weight loss will require the reduction of total calorie consumption which means fewer calories and an increase in physical activity.

The CIM (carbohydrate insulin model) postulates that the quality of food eaten plays an important and critical role in management of body weight rather than the total caloric intake.

According to CIM it is the increased fat storage due to the consumption of processed carbohydrates and not the increased consumption of calories that actually leads to weight gain and is mostly responsible for elevated rates of obesity. Hormonal and metabolic changes which will occur due to eating specific foods are the main cause of weight gain with the excess calories being the outcome.

Reducing caloric intake tends to cause weight loss only in the short term. The is because the body adapts to the lower intake of calories which results in increased hunger and a lower metabolic rate.

The CIM postulates that food quality plays a more important role in the weight gain than the overall intake of calories. The intake of of carbohydrates has increased since the 1980’s and is likely because of the perception that eating fat causes weight gain.

The GI (glycemic index) rates carbohydrates due to how rapidly they increase blood glucose levels after consumption. The glycemic load is also a measure that can provide more comprehensive information about the surge in blood sugar levels.

The consumption of starchy and highly processed foods that have rapidly digestible carbs result in a blood glucose level surge. Foods with a high glycemic load such as potato products, refined grains and other foods high in starch are turned rapidly into free sugars.

As a contrast, proteins and fats have a minor impact on blood sugar level. Minimally processed grains, nuts, legumes, whole fruits and non-starchy vegetables typically have a moderate or low glycemic load.

A rapid surge of the glucose level after eating high glycemic foods will result in insulin secretion which regulates blood sugar and helps the liver, muscles, and fat tissue absorb glucose. At the same time, eating carbs that are rapidly digestible suppresses the level of glucagon, a hormone. The pancreas will secrete glucagon to counteract low  blood sugar which occur between meals. The secretion of glucagon which is stored in the liver raises blood glucose levels.

The hormonal state then slows down the breakdown of energy stored in the liver and adipose tissue which is required to fuel other critical body tissues. That causes low levels of fatty acids, glucose, and a variety of metabolites in the blood which resembles a fast-like state.

In animals it has been shown that all calories are not alike and that weight gain and obesity can also develop without an increase food intake. There is not yet proof of this in humans.

The CIM theory of weight gain has created a sizable amount of controversy which includes how carbs and insulin affect weight gain. There is a lot of individual variability in the changes and physiology that occur in individuals as they develop obesity. There could be some role for insulin, but there could be a lot of other factors. This makes it more challenging to identify the causes and then the potential treatments to help to prevent weight gain and obesity.

The implications of counting calories then subtracting those that may have been burned with physical activity, has challenges in terms of accuracy. This can be easily gamed so that a person thinks they are doing the right thing, but in fact they are not really accurately assessing the two components which can lead to poor results.

It is suggested that adhering to a diet that consists of low GI foods can lead to weight loss through increasing energy levels and reducing hunger. An important strategy is to replace high glycemic foods with high fat foods and allowing for a moderate consumption of whole fruits, legumes, nuts, whole grains and non-starchy vegetables.

To view the original scientific study click below:
The carbohydrate-insulin model: a physiological perspective on the obesity pandemic