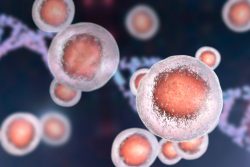 A group of researchers from Penn Engineering have discovered through novel imaging techniques that stem cells can actually control their transformation into other kinds of cells. This means that cells may have more control over their fate contrary to previous thought.

Previously it was believed that transformation into other cells was mostly outside the cell’s control. The researchers studied how stem cells interact with their environment by using hydrogels or engineered materials which mimic body tissue composition.

The researchers designed a new imaging technique to visualize proteins that cells produce in their micro environment. They also developed two unique hydrogels with varied biophysical properties into which cells were embedded and used along with their labeling technique.

The team discovered that once cells were placed in hydrogels, they began to create proteins which changed the surrounding environment and influenced the behavior of the cells. They basically determined their own function through shaping their environment through the proteins.

The findings that the secreted proteins meaningfully impact the behavior of the cells, calls for reevaluation of how hydrogels are used in the field. The biophysical properties of the hydrogels are often implicated in the behavior of cells. The work suggests that proteins which are secreted by the cells within hours after embedding in a hydrogel might supplement and possibly cancel out effects of the inherent properties of hydrogels which scientists are intending to study.

The research has important applications for the engineering of tissue, drug screening and more. The findings that proteins are released into a hydrogel environment is knowledge for trying to study hydrogel effects alone, which the additions of proteins would complicate. A new technique of labeling developed by the researchers might lead to a better understanding of how cell function is affected by proteins.

The team also conduct research on biomaterials which can be used to regenerate body tissues. They spearheaded a project in 2011 to regrow cartilage tissue.

Additionally, strides in cell research have been made by discovering the important tole sugars play in inter cell communication by using a technique known as atomic force spectroscopy.

Understanding cells and cellular environment not just as individual entities, but also as an interwoven system is critical to progress in biological fields.