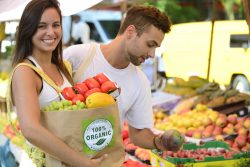 A large scale observational study from Inserm, a French organization similar to the U.S. NIH, has found that people who consumed the most organic produce had a 25% lower risk of developing any type of cancer. While it might make sense to think all produce as equally nutritious, the growing scientific research evidence shows there is a distinct advantage to consuming organics.

The study involved 68,946 participants who consistently consumed the most organic produce during the 4 year study. While factors such as smoking, obesity and lack of exercise all play a role in whether a person will develop cancer, the findings were significant enough to lead to further studies and also justify the higher cost of switching to organic produce.

They found low levels of the synthetic pesticides including some which are linked to cancer and other serious health problems in the conventionally grown produce. By choosing organics we are making a better health choice, but also making a better choice for the environment.

The pesticides most commonly linked to cancers are all pervasive in our environment. They include Organophosphates malathion, diazinon and glyphosate which is the active ingredient in Monsanto’s toxic Roundup product. The company is currently in court to determine its possible role in the development of cancer in a long line of people.

The study participants completed questionnaires in regards to their consumption of 16 different foods including vegetables, fruits, fish, eggs, meat, grains, dairy and soy based foods. Cancer was diagnosed in 1,340 of the participants between 2009 and 2016. The most common cancers were breast cancer and prostate cancer. The participants who made healthy lifestyle choices and consumed the most organic foods, were found to be 25% less likely to develop cancer.

Of course the best cure is always prevention by making healthy lifestyle choices. Getting enough sleep, exercising, drinking clean water, managing stress, avoiding smoking and alcohol, maintaining a healthy weight and switching to organics as confirmed by the study, can all help lower the risks of developing cancer.

Association of Frequency of Organic Food Consumption With Cancer Risk