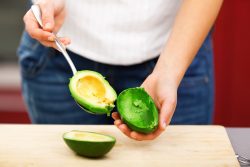 As you think about what to drink and eat to help with aging, have you ever wondered what is the best fruit for anti-aging?

It may be surprising that it is the avocado! But how can it help make your brain sharper?

A randomized trial by researchers at Tufts University analyzed the results from participants separated into two groups. The first group ate an avocado every day for six months while the others ate either one cup of chickpeas or one potato every day.

At the end of the trial, the participants who consumed the avocados had an increased level of lutein which is related to memory and cognitive function.

The research is promising for healthy aging. As people age, they are paying more attention to their health and a simple dietary addition such as the avocado can be a part of good nutrition for all ages.

Avocados are beneficial due to their amount of magnesium. Magnesium is critical to life as it is contained in every cell in the body and is also important for carrying out a variety of bodily functions. One avocado contains almost 60 milligrams of magnesium which amounts to 15% of the daily recommended amount.

Magnesium not only works in the brain for cognitive support and mood, but also outside the brain in the blood vessels. It acts as a vasodilator which dilates the vessels which increases blood flow to the brain.

Avocados are also high in both monounsaturated and omega-3 fatty acids About 60% of the brain is composed of fat and one half of that is omega-3 type fatty acids. Omega-3 fatty acids can help prevent the onset of cognitive diseases such as slow mental decline and Alzheimer’s. The brain needs Omega-3 fatty acids to make nerve cells which are critical to one’s ability to learn and to memory.

So keep your brain sharp by adding avocados to your diet.