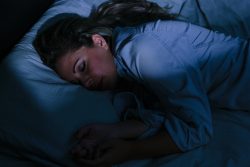 Electric lights have been a big change in the way we live our lives. It has been only about 130 years ago that they were invented bringing drastic changes to how humans function on a daily basis including our sleep patterns. For those who want better health or just more peace when it comes to sleeping at night make sure there isn’t any light coming into your bedroom. The dark will help you relax faster which leads towards a happier mood overall and improved physical health.

The connection between exposure to light at night and our health is not fully understood, but a new study published in Sleep has found that it can create a higher risk of obesity, metabolic syndrome, and diabetes. The research demonstrates how light at night (LAN) impacts the body by reducing melatonin production.

The team conducted a study that measured light exposure using wrist-worn devices over seven days. They found adults who experienced LAN at night were more likely to have obesity or high blood pressure, compared with those without any type of nighttime illumination from electronics sources like smartphones and tablets. These findings suggest long term effects on cardiometabolic risks need further research into how sleep patterns may be influenced by electrical lights after dark.

The modern world is full of artificial sources of light that we are exposed to daily. Nowadays we are bombarded by an abundance of lights 24/7 – whether it be from artificial sources of lighting such as televisions, computers or cell phones. This has led humans to developing health problems associated with constant exposure such as headaches or pain in the eyes amongst other things.

In a recent study, researchers found that women who watched more than two hours per day from the hours of 8pm – 6am had an obesity rate 11% higher then those without exposure during these hours. Women who sleep with a nightlight or television on are 17% more likely to have gained about 11 pounds. However, sleeping in rooms that get their light from outside the room was not associated with weight gain.The study found notable differences in how much people weighed depending upon what kind of illumination they were exposed to while asleep.

The artificial light at night may interfere with the sleep hormone melatonin. This could have implications for people living in urban areas where sources such as streetlights and neon signs shine bright into homes. This disrupts our ability to fall asleep naturally due to interruption of natural rhythms like those caused by daylight savings time changes or technological gadgets that stay lit after sunset.

The body’s circadian rhythm determines when you’re most awake and asleep. When exposed to light, like in the morning or at night time for example-your brain will slightly advance (or delay) this natural cycle by generating either more or less hormones. This will control things such as metabolism & cell cycling and can lead not only to bad moods but also health issues because cells don’t work properly without these signals from our brains.

It is recommended that you make an effort to eliminate all sources of light in your bedroom, including digital alarm clocks and cell phones. Use incandescent bulbs instead – they’re less efficient at suppressing melatonin than LED ones are so only place them where you spend most of the time during day or evening hours. Leave LEDs for areas outside rooms with minimal exposure like hallways/closets etc., because these have different effects on sleep patterns.

You can also optimize your circadian rhythm by getting exposure to bright natural light during the day. Ideally, strive for at least 15 minutes of sunlight in the morning hours. This will help regulate melatonin production so that we start off feeling refreshed and then dropping it to normal daytime levels, so you feel awake during the day and can sleep better at night.

To view the original scientific study click below:
Light at night in older age is associated with obesity, diabetes, and hypertension