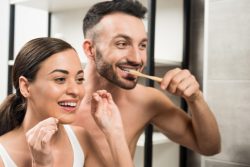 Brushing removes plaque and food debris, but the bristles of a toothbrush can’t reach deep in between teeth to remove it all. Flossing alone won’t be enough to keep you from getting gum disease and other oral complications because it only removes some of the plaque that has been collected on them throughout the day. In order for a person’s mouth to stay as clean as possible they need both an efficient routine with toothbrush and floss daily. As a result there’s less dental plaque which can lead to gum disease. But, should you brush or floss first?

Some dentists argue that flossing should come first because the brushing action will remove any particles and plaque that have been released and make them easier to brush away with a toothbrush. There are many people who brush their teeth and then floss. The problem with brushing then flossing is that any food, plaque or bacteria released from between your teeth remain in the mouth until next time you brush.

A study was done to evaluate the efficacy of brushing and flossing on reducing dental plaque. After prophylaxis, 25 students discontinued all forms of oral hygiene for 48 hours. The study was performed in two phases with two-week washout intervals. In one phase, they first brushed, then flossed. In the other they used dental floss then brushed.

The researchers found that by using a floss-brush approach, people were able to reduce interdental and whole plaque significantly more than when they used brush and floss. However, there was no evidence of significant difference between groups in areas where marginal plaque had been present before treatment started.

Why is flossing so important? Plaque, the main cause of gum disease can easily harden on your teeth within 24-36 hours if you don’t brush or visit a dentist often enough. But by flossing and then brushing afterwards most people will not have any problems with this.

Maintaining healthy gums ensures that tooth decay won’t have room to grow by providing protection against acids found within foods we eat daily. Gum disease is a serious mouth infection that can destroy your teeth and cause pain. It occurs when there are too many bacteria on the surface of our dental plates This can be caused by not brushing or flossing properly as well as missing routine check-ups with a dentist about once every six months.

The key to preventing dental problems like cavities and gum disease is sticking with a good oral health routine. This includes regularly flossing and brushing your teeth twice per day.

To view the original scientific study click below:
The effect of toothbrushing and flossing sequence on interdental plaque reduction and fluoride retention: A randomised controlled clinical trial