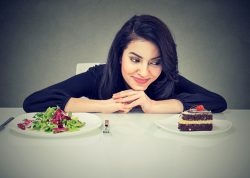 New research has shown that while the sensation of sweetness begins on the tongue, sugar molecules also trip sensors found in the gut which directly send signals to the brain. A little bit of sugar can make a person desire just about anything, but its sweetness doesn’t totally explain our desire. The new study shows that this molecule has a indirect channel to the brain.

The team at Howard Hughes Medical Institute shows while sugar triggers specialized taste buds found on the tongue, it also turns on a completely separate neurological pathway that beings in the gut. Signals in the intestines heralding the arrival of sugar travel to the brain. Here they nurture a desire for more, the researcher’s experiments with mice have shown. This particular gut to brain pathway appears to be selective responding primarily to sugar molecules and not artificial sweeteners.

Scientists have already known that sugar exerted unique control over the brain. In a 2008 study, mice that do not have the ability to taste sweetness could still desire sugar. The recent study’s discovery of the sugar sensing pathway can help explain why sugar is different and directs ways a person might quell their insatiable appetite for it. By separating the concepts of sweet and sugar, the team says sweet is linking and sugar is wanting.

The term sugar is a group which encompasses a variety of substances our bodies use as fuel. Consuming sugar activates the brain’s system of reward making mice and humans alike feel good. But, in our world where sugar that has been refined is plentiful, this deeply ingrained appetite could run out of control.

The normal American’s yearly sugar intake has skyrocketed from less than 10 lbs. in the late 1800s increasing to more than 100 lbs. currently with that increase coming at a cost. Studies have tied together excess consumption of sugar to a variety of health problems including type 2 diabetes and obesity.

Earlier research has shown that sugar and artificial sweeteners turn on the same taste sensing system. In the mouth, these molecules start up the sweet taste receptors found on taste buds which activates signals that travel to the part of the brain that processes the sweetness.

However, sugar affects behavior in a way that artificial sweeteners do not. The team ran a test pitting sugar against the artificial sweetener Acesulfame K which is typically found in diet sodas, sweetening packets and other food and beverage products. When offered water with the sugar or sweetener, mice initially drank both. However, within two days they switched almost exclusively to the water that contained sugar. The team reasoned that this unquenchable motivation the mice have for eating sugar instead of sweetness, might have a neural basis.

Through brain activity visualization when the mice consumed sugar vs. artificial sweetener or water, the team identified for the first time the region of the brain that responds only to sugar – the caudal nucleus of the solitary tract (cNST). The cNST which is found in the brain stem separate from where mice process taste, is a hub for information about the state of the body.

The team determined that the path to the cNST begins in the lining of the intestine. Here, sensor molecules initiates a signal that travels by the vagus nerve providing a direct relay of information from the intestines and on to the brain.

This gut to brain circuit has a preference for one form of sugar – glucose and similar molecules. It ignores artificial sweeteners which might explain why these additives can’t seem to fully replicate the appeal of sugar. It also overlooks other types of sugar, mostly fructose which is found in fruit. Glucose is an energy source for all living things. This could explain why the system’s specificity for the molecule has evolved.

Earlier scientists speculated that sugar’s amount of energy or calories might explain its appeal since many artificial sweeteners are lacking in calories. However, the recent study has shown this is not the case since calorie free, glucose like molecules can also activate the gut to brain sugar sensing pathway.

The group is now studying the links between this gut brain circuit and other systems of the brain such as feeding, reward, and emotions to better understand how the brain’s strong preference for sugar develops. And although the study has been on mice, the team believes that essentially the same glucose sensing pathway exists in people.

Through discovering this circuit that explains how sugar directly impacts our brain to drive consumption, it also exposes new potential opportunities and targets for strategies to help curtail the insatiable appetite for sugar many of us have.