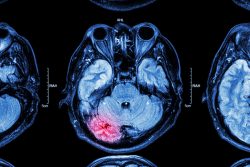 Researchers at Sanford Burnham Prebys Medical Discovery Institute and Loma Linda University Health have shown the possibility of applying MRI to predict the efficacy of employing human neural stem cells to treat brain injuries. This is the first ever biomarker for regenerative medicine that may help personalize treatments with stem cells for neurological disorders and also improve efficacy.

The team hope to test their findings in a clinical trial evaluating stem cell therapy in newborns who are experiencing brain injury during birth which is known as perinatal hypoxic-ischemic brain injury (HII).

The team is hopeful that MRI which is currently being used during the course of and care for newborns with perinatal hypoxic ischemic brain injury, will help ensure that those infants with the injury get the best and most appropriate treatment possible.

Sometime in the future, MRI could possibly help guide the use of stem cells to treat additional brain disorders such as spinal cord injury and stroke.

Scientists now understand that in many cases, human neural stem cells are therapeutic because they are able to protect living cells. This is in contrast to replacing or re-animating nerve cells that are already dead. Thus, understanding the health of brain tissue before a stem cell implant is crucial to the treatment’s possible success.

Tools that can help predict the efficacy of neural stem therapy might increase the success of clinical trials such as those ongoing in people with Parkinson’s Disease, injury to the spinal cord, and other neurological conditions. This could also spare people who do not respond to treatment from an invasive procedure that offers false hope.

Stem cell therapies offer extraordinary promise. The current study suggests that a readily available technique, MRI which is already being used in many injuries of the brain to determine the extent of neurological damage, could be a useful tool in determining who will and will not benefit from the stem cell treatment.

Evan Snyder, M.D., Ph.D., has envisioned using human neural stem cells in an effort to protect newborns with acute perinatal HII from damage to the brain. He and his team made the discovery that MRI can be used as a quantifiable, objective and easily available basis for exclusion and inclusion criteria for the stem cell treatments while engaged in preclinical trials required prior to beginning human clinical trials for newborns with HII.

This particular brain injury affects two to four newborns out of every 1,000 babies that are born in the U.S. and is attributable to a variety of complications including disrupted maternal blood pressure, maternal infection, and umbilical cord compression.

The hope is that human neural stem calls could help rescue enough vulnerable and injured, though not dead, neural cells. This could potentially help prevent the most severely affected infants from developing epilepsy, cerebral palsy, intellectual disability, and other neurological disorders that will often appear after HII if left untreated.

In the current study, the team used MRI to measure two different areas surrounding the regions of HII brain injury in rats – the penumbra which is a region which consists of mildly injured and stunned neurons, and the core which is an area which consists of neurons that are dead. They discovered that rats with a larger penumbra and smaller core which had received human neural stem cells, had better neurological outcomes which included improved memory which was demonstrated by their ability to swim to a hidden platform and a greater willingness to venture to a brightly lit area.

In the rats, the penumbra to which the neural stem cells honed avidly, became normal tissue while the core did not improve and attracted fewer cells (based on MRI and histological standards). Penumbra which did not receive cells become part of the core which was populated by dead neurons, indicating the benefit of the treatment with the stem cells.

The approach to brain lesion classification is a very strong patient stratification tool that allowed the team to identify newborns who might benefit from the stem cell therapy and can also protect others from having unnecessary treatments done. Based on their findings, only those newborns with a large penumbra volume in relation to core volume, should consider having a transplant of human neural stem cells. And just as important, newborns so severely injured that only the core is present, or babies with a mild case of HII that not even a penumbra is present, should not receive the stem cells as the treatment would unlikely be impactful.

A Biomarker for Predicting Responsiveness to Stem Cell Therapy Based on Mechanism-of-Action: Evidence from Cerebral Injury.