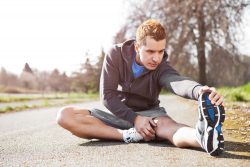 The CDC reports that about 45% of adults in the U.S. which equates to about 108 million people have hypertension. In 2018, hypertension was either a contributing cause or a primary cause of almost half a million deaths. And according to the National Heart, Lung and Blood Institute, uncontrolled or undiagnosed hypertension can result in a variety of diseases including chronic kidney disease, cardiovascular disease, vascular dementia and eye damage.

The current study by USask researchers is the first to test walking against stretching in a head-to-head comparison in the identical group of participants. The team randomly assigned 40 females and males with a mean age of 61 to two groups for an eight week study period. One group participated in a whole body stretching routine for 30 minutes each day for 5 days per week. The other group participated in brisk walks for the same amount of time and frequency. Every participant had elevated blood pressure or had stage 1 hypertension at the beginning of the study.

The participants in the walking routine were asked to monitor their pulse and increase their pace if their pulse fell short of 50-65% of the maximum heart rate for their age.

All participant’s blood pressure was measured at both the beginning and at the end of the 8-week program utilizing three different techniques – one with a sphygmomanometer while the person sat down, one using the same meter while the person was lying down, and one with an automatic ambulatory blood pressure monitor which was set to take readings in 20 minutes intervals during waking time and in 45 minute intervals during sleep.

When compared to brisk walking, stretching resulted in greater reductions in blood pressure across all three types of the measurements. The study did show that the walkers lost more body fat from their waist over the 8 week period. The two different groups did not differ in their overall levels of activity outside their 30 minute daily routines. This indicates that the group participants did not compensate by adjusting or changing their usual levels of activity.

People who walk for help in reducing their blood pressure should continue to do so, but think about adding in some sessions of stretching. People should not come away from the research thinking they should not be participating in some kind of aerobic activity such as biking, walking, etc. All these activities have positive effects on blood sugar, cholesterol levels and body fat.

While the research protocol had the participants stretching for 30 minutes each time, the team suspects people can still benefit the same from shorter routines that emphasize the larger groups of muscles in the legs, in particular the hamstrings and the quadriceps. Yoga has been shown to product similar reductions in blood pressure.

The advantage to stretching is that it can be easily incorporated into a person’s daily routine, it doesn’t put people at the mercy of the weather, it is easy on the joints, and does not require a big commitment of time.

The team is currently seeking funding to engage in a larger study that would include more participants. Their goal is to expand the scope beyond measurements of blood pressure to explore possible physiological reasons behind why stretching results in reduced blood pressure – such as changes in the body’s nervous system and arterial stiffness.

To view the original scientific study click below:
Stretching is Superior to Brisk Walking for Reducing Blood Pressure in People With High–Normal Blood Pressure or Stage I Hypertension.