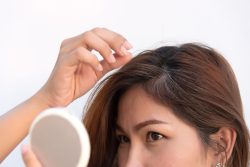 Recent research has discovered evidence that supports previous anecdotes that stress can cause hair to go gray. The findings advance the knowledge that stress impacts the human body.

For the first time researchers at Harvard University have found exactly how the process occurs. In mice, the type of nerve that is involved in the fight or flight response causes permanent damage to the pigment regenerating stem cells found in the hair follicles.

The team wanted to understand if the anecdote that stressful experiences can lead to the phenomenon of hair graying is true. And if this is particularly true in skin and hair which are the only tissues that can be seen from the outside. If the connection is true, then learning how stress leads to changes in diverse tissues may be better understood. Hair pigmentation is a tractable and accessible system to begin with.

Because stress can affect the whole body, the team first had to narrow down which body system is responsible for connecting stress to hair color. They first hypothesized that stress will cause an immune attack on cells that are pigment producing. However, when mice that lacked immune cells still showed hair graying, they then turned to the hormone cortisol. However this also was a dead end.

Stress will elevate cortisol levels in the body so they thought this occurrence might play a role. However, when the team removed the adrenal gland from the mice so they were not able to produce cortisol, their hair still turned gray when under stress.

After eliminating a variety of possibilities, the team honed in on the sympathetic nerve system. This system is responsible for the fight or flight response. These nerves branch out into every hair follicle on the skin. The team discovered that stress caused these nerves to release norepinephrine, a chemical which gets taken up by nearby pigment regenerating stem cells.

The team found that the norepinephrine from sympathetic nerves caused the stem cells to activate excessively. These stem cells convert into the pigment producing cells which prematurely deplete the reservoir. After a few days, all of the pigment regenerating stem cells were lost. And once they are gone, they can’t regenerate pigment any longer. The damage is permanent.

These findings underscore the negative side effects of an otherwise protective evolutionary response. Acute stress and particularly fight or flight has been viewed as beneficial to an animal’s survival. However in this case, acute stress causes the permanent depletion of stem cells.

To make the connection of stress and hair graying, the team began with a whole body response and then progressively zeroed into individual organ systems, cell to cell interaction and then all the way down to molecular dynamics. This process required several research tools including methods to manipulate nerves, cell receptors, and organs.

The team also collaborated with many scientists across a wide range of disciplines to go from the highest level to the smallest detail in an effort to solve a very fundamental biological question.

It is known that peripheral neurons powerfully regular blood vessels, organ function and immunity. However, less is known about how they regulate stem cells. With the current study, it is known that neurons can control stem cells and their functions. The team can also explain how they interact at the molecular and cellular level and then link stress to hair graying.

The team’s findings can help illuminate effects stress can have on various tissues and organs. The understanding will help pave the way to new studies that will seek to block or modify the damaging effects stress causes on the human body.