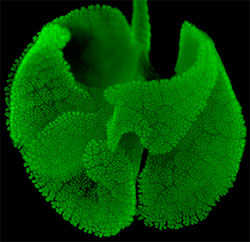 A researcher at the School of Medicine and his colleagues have succeeded in isolating mouse lung stem cells, growing them in large volumes and incorporating them into injured lung tissue in mice.

A study describing the research was published online Nov. 6 in Nature Methods. Kyle Loh, PhD, an investigator at the Stanford Institute for Stem Cell Biology and Regenerative Medicine, and Bing Lim, MD, PhD, an investigator at the Genome Institute of Singapore, share senior authorship. The lead author is Massimo Nichane, PhD, currently a research scientist at the Stanford stem cell institute.

The lungs are among the most vital organs of the body. In conjunction with the cardiovascular system, they allow air to travel to every cell and get rid of the waste products of respiration, such as carbon dioxide. For many people with end-stage lung diseases, the only option is lung transplantation.

“Scientists have previously had little success in putting new lung cells into damaged lung to regenerate healthy tissue,” Loh said. “We decided to see if we could do that in an animal model.”

Once they had isolated the stem cells, they were able to make them multiply dramatically. Each mouse lung stem cell that they start started with was able to grow into 100 billion billion lung stem cells over the course of six months. Previously, researchers had not had much success expanding any lung stem cell populations in the laboratory.

Finally, they injected the stem cells into mouse lungs that had been injured by a variety of toxins. “What we saw was that these multipotent stem cells repaired the injured tissue and were able to differentiate into the many different kinds of cells that make up the healthy lung,” said Nichane.

“Our newfound ability to grow these mouse multipotent lung stem cells in a petri dish in very large numbers, and the cells’ ability to regenerate both lung airway and alveolar tissue, constitutes a first step towards future lung regenerative therapies,” Loh said. “Future work will focus on whether analogous multipotent stem cells can be found and cultivated from humans, which may open the way to eventually replenishing damaged lung tissue in the clinic.”