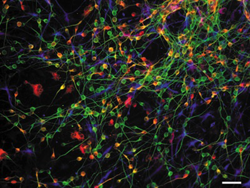 Back in 2007 scientists announced that they had created embryonic like stem cells from adult human skin cells. IPS cells (induced pluripotent stem cells) have been very valuable in research, however converting them into any type of cell that could be used for actual stem cell therapy is extremely complicated and far from becoming safe or available. Embryonic stem cells exist to create an entire organism not to repair an adult. A new breakthrough allows researchers to take differentiated cells from potentially any part of the body and reverse age them without going all the way back to an embryonic like state. In a study of mice these have already been used successfully for cell replacement therapy. This may be the breakthrough needed to rebuild damaged, diseased or old organs with a few injections back to a young and healthy condition in the not too distant future.

“A major block in the critical path of regenerative medicine is the lack of suitable cells to restore function or repair damage,” says co-senior author Tom Waddell, a thoracic surgeon at the University of Toronto. “Our approach starts with purifying the cell type we want and then manipulating it to give those cell types characteristics of progenitor cells, which can grow rapidly but produce only a few cell types. As such, it is much more direct, more rapid, and the batches of cells are more purified.”

In recent years, induced pluripotent stem (iPS) cells have generated a great deal of interest as a potentially unlimited source of various cell types for transplantation. This method involves genetically reprogramming skin cells taken from adult donors to an embryonic stem-cell-like state, growing these immature cells to large numbers, and then converting them into specialized cell types found in different parts of the body. A major advantage of this approach is the ability to generate patient-specific iPS cells for transplantation, thereby minimizing the risk of harmful immune reactions.

Despite significant progress, these protocols remain limited by low yield and purity of the desired mature cell types, as well as the potential of immature cells to form tumors. Moreover, there is no standardized approach applicable to all cell types, and the development of personalized therapies based on patient-derived pluripotent cells remains very expensive and time consuming. “We have pursued cell therapy for lung diseases for many years,” Waddell says. “One key issue is how to get the right type of cells and lots of them. To avoid rejection, we need to use cells from the actual patient.”

To address these issues, Waddell and co-senior study author Andras Nagy of Mount Sinai Hospital developed an interrupted reprogramming strategy, which is a modified version of the iPS methodology. The researchers started to genetically reprogram adult Club cells isolated from mice, transiently expressing the four iPS reprogramming factors, but interrupted the process early, prior to reaching the pluripotent state, to generate progenitor-like cells, which are more committed to a specific lineage and show more controlled proliferation than pluripotent cells.

“The reprogramming process had previously been considered as an all-or-none process,” Waddell says. “We were surprised to the extent that it can be fine-tuned by the timing and dosing of the drug used to activate the reprogramming factors. That is interesting as it gives lots of opportunities for control, but it does mean we have lots of work to do to get it right.”

The researchers showed that the resulting Club-iPL cells could give rise to not only Club cells, but also to other respiratory tract cells such as mucus-secreting goblet cells and ciliated epithelial cells that produce the CFTR protein, which is mutated in patients with cystic fibrosis. When the Club-iPL cells were administered to CFTR-deficient mice, the cells incorporated into tissue lining the respiratory tract and partially restored levels of CFTR in the lungs without inducing tumor formation. This technology can theoretically be applied to almost any cell type that can be isolated and purified, and isolation of highly purified populations of adult cells from most organs is already possible with existing techniques.

“To create specialized cell types for use in cell therapy requires only that we insert the genes (or use non-transgenic approaches) and then test the drug dose and timing required for each cell type and each patient, so it should be relatively scalable at low cost compared to other approaches using each patient’s own cells,” Waddell says. “It should be very easy for other labs to use a similar approach.”

According to the authors, the approach could be used for a variety of regenerative medicine practices, including cell replacement therapy, disease modelling, and drug screening for human diseases. But there is still a long way to go before clinical translation. For their own part, the researchers plan to test this approach with other cell types, including human cells. They will also try to determine if there are safe ways to engraft these cells in human lungs. “The study is a proof of principle, the way this concept may ultimately be used in humans could be different, and it will be many years before this will be attempted in humans,” Waddell says.