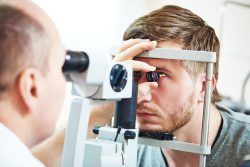 Scientists at Harvard Medical School have successfully reversed age-related vision loss in mice through turning back the time on aged retina eye cells to bring back youthful functioning of the gene. This work is considered to be the first test of the possibility to reprogram, in a safe manner, complex tissues such as nerve cells found in the eye to an earlier age.

The team also has reversed loss of vision successfully in the mice that have a condition that mimics human glaucoma which is one of the leading causes of blindness globally.

The achievements represent the first successful attempts to reverse glaucoma induced loss of vision instead of merely stemming its progression. If future studies are replicated, this approach would show the way for therapies to promote repairing tissues of various organs and also reverse in humans aging and diseases that are age related.

The study can demonstrate that it is possible to reverse safely the age of complex tissues as the retina and restore its biological function to a youthful state. They caution that the findings need to be replicated in future studies, including in a variety of models of animals before human experiments. However, the results offer conceptual proof and also a pathway to designing treatments for a variety of diseases that are age-related.

If realized through future studies, the findings will possibly be transformative for the treatment of diseases that are age related such as glaucoma and also to the fields of medical therapeutics and biology for disease at large.

For the work they used an adeno-associated virus (AAV) as the vehicle for delivering three youth restoring genes into the retinas in mice – Oct4, Sox2, and Klf4 which during embryonic development are switched on.

The treatment showed multiple effects that were beneficial on the eyes of the mice. It firstly promoted regeneration of the nerve after damage to the optic nerves in mice. It also reversed vision loss in mice that had a condition that mimicked human glaucoma. And then it also reversed loss of vision in animals aging without glaucoma.

The new theory the research team used was based on why humans age. Almost all cells in a humans body have the same DNA molecules with dunctions that are widely diverse. To achieve the specialization of this degree, these cells can only read genes that are type specific. This regulatory function is the purview of the epigenome which is a system of specific patterns turning genes on and off without any alteration of the basic underlying DNA sequence of the gene.

The theory proposes that changes to the epigenome with time causes cells to read genes that are wrong and malfunction which promotes rise to diseases associated with aging. In the current study, the team hypothesizes that if DNA methylation, a way by which methyl groups are added onto DNA, does control aging, then deleting some of its footprints may reverse cell aging inside living organisms and eventually restore them to a more youthful and earlier state. Earlier work has achieved this in cells grown in lab dishes, thus falling short of showing the effect in a living organism. The new findings have demonstrated that the approach could be used in animals as well.

For the current study, the team wanted to use cells in the bodies central nervous system due to the fact that it is the first part of the body that is affected by aging. Following birth, the central nervous is prone to regeneration quickly.

In order to test if the young animals have the capacity to regenerate could be imparted to adult mice, the team had delivery of the modified three-gene combination per an AAV into retinal ganglion cells of adult mice who had optic nerve injury. The treatment resulted in a increase two-fold in the number of retinal ganglion cells surviving following the injury and increase five-fold in nerve regrowth.

At the start of the project, many of the team’s colleagues thought their approval would either be too dangerous or would fail to ever be used. However, their results promote this method is indeed safe and could possibly revolutionize eye treatments along with many other organs that are age affected.

Following the positive findings in mice with injuries of the optic nerve, the team partnered with other colleagues to find out if the three-gene cocktail could restore loss of vision due to glaucoma and also another test to see if the approach could reverse loss of vision stemming from the normal aging process.

In a mouse model that had glaucoma, the treatment led to increased nerve cell electrical activity and a notable increase in visual acuity. Remarkably, it did so following the glaucoma-induced vision loss had already occurred.

Scientists have rarely been successful in regaining visual function following an injury. This new approach which would successfully reverse multiple causes of loss vision in mice without the need for a retinal transplant, is basically a new treatment modality in regenerative medicine. The treatment also worked well in older, year old mice with vision diminishing due to normal aging.

The findings are encouraging and researchers believe that if these confirmed findings in further animal study, they may initiate clinical trials before two years to test the efficacy of this approach in people who have glaucoma.