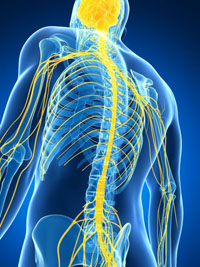 Injuries to the spinal cord often cause paralysis and other permanent disabilities because severed nerve fibers do not regrow on their own. During the past few years a number of paralyzed patients have experienced remarkable improvement as a result of Stem Cell Therapy. When their own stem cells or those extracted from cord blood were injected into the spinal column they went straight to the damaged nerves and helped them regenerate. One limitation is that the treatment must be given as soon as possible after the injury. When the same injections were given to patients who had been paralyzed for a year or more they were rarely successful. During the first few months after a spinal injury the nerves lose their ability to regenerate even with the introduction of new stem cells.

Now, scientists of the German Center for Neurodegenerative Diseases (DZNE) have succeeded in releasing a molecular brake that prevents the regeneration of nerve connections. Treatment of mice with Pregabalin, a drug that acts upon the growth inhibiting mechanism, caused damaged nerve connections to regenerate. Researchers led by neurobiologist Frank Bradke report on these findings in the journal Neuron.

Human nerve cells are interconnected in a network that extends to all parts of the body. In this way control signals are transmitted from head to toe, while sensory inputs flow in the opposite direction. For this to happen, impulses are passed from neuron to neuron, not unlike a relay race. Damages to this wiring system can have drastic consequences particularly if they affect the brain or the spinal cord. This is because the cells of the central nervous system are connected by long projections. When severed, these projections, which are called axons, are unable to regrow.

Neural pathways that have been injured can only regenerate if new connections arise between the affected cells. In a sense, the neurons have to stretch out their arms, i.e. the axons have to grow. In fact, this happens in the early stages of embryonic development. However, this ability disappears in the adult. Can it be reactivated? This was the question Professor Bradke and co-workers asked themselves. “We started from the hypothesis that neurons actively down-regulate their growth program once they have reached other cells, so that they don’t overshoot the mark. This means, there should be a braking mechanism that is triggered as soon as a neuron connects to others,” says Dr. Andrea Tedeschi, a member of the Bradke Lab and first author of the current publication.

In mice and cell cultures, the scientists started an extensive search for genes that regulate the growth of neurons. “That was like looking for the proverbial needle in the haystack. There are hundreds of active genes in every nerve cell, depending on its stage of development. To analyze the large data set we heavily relied on bioinformatics. To this end, we cooperated closely with colleagues at the University of Bonn,” says Bradke. “Ultimately, we were able to identify a promising candidate. This gene, known as Cacna2d2, plays an important role in synapse formation and function, in other words in bridging the final gap between nerve cells.” During further experiments, the researchers modified the gene’s activity, e.g. by deactivating it. In this way, they were able to prove that Cacna2d2 does actually influence axonal growth and the regeneration of nerve fibers.

Cacna2d2 encodes the blueprint of a protein that is part of a larger molecular complex. The protein anchors ion channels in the cell membrane that regulate the flow of calcium particles into the cell. Calcium levels affect cellular processes such as the release of neurotransmitters. These ion channels are therefore essential for the communication between neurons.

In further investigations, the researchers used Pregabalin (PGB), a drug that had long been known to bind to the molecular anchors of calcium channels. Over a period of several weeks, they administered PGB to mice with spinal cord injuries. As it turned out, this treatment caused new nerve connections to grow.

“Our study shows that synapse formation acts as a powerful switch that restrains axonal growth. A clinically-relevant drug can manipulate this effect,” says Bradke. In fact, PGB is already being used to treat lesions of the spinal cord, albeit it is applied as a pain killer and relatively late after the injury has occurred. “PGB might have a regenerative effect in patients, if it is given soon enough. In the long term this could lead to a new treatment approach. However, we don’t know yet.”

In previous studies, the DZNE researchers showed that certain cancer drugs can also cause damaged nerve connections to regrow. The main protagonists in this process are the microtubules, long protein complexes that stabilize the cell body. When the microtubules grow, axons do as well. Is there a connection between the different findings? “We don’t know whether these mechanisms are independent or whether they are somehow related,” says Bradke. “This is something we want to examine more closely in the future.”