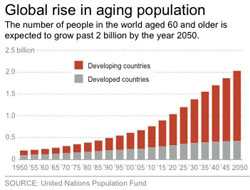 The human race is now going through the biggest macroeconomic change in history. This change has two faces. First, life expectancies have nearly doubled in the West since the beginning of the 20th century. This change is even more rapid in formerly undeveloped regions as they catch up to Western technologies.

The other aspect is falling birth rates, which seem correlated to longer life spans. Fertility rates (births per woman) have fallen below replacement rates globally for the first time ever. And in many developed countries, fertility rates are alarmingly low.

A fertility rate of at least 2.1 children per woman is needed for native population stability in the West. It can be 2.5 or more where infant mortality is higher.

Japan and Germany are now at about 1.4 children per woman and falling. Singapore, Greece, and Spain are at about 1.3 births per woman. Within decades, whole nations will be at 1 birth per woman.

This means the next generation will be half the size of the last.

Every generation, from now on, will be smaller than the last. For economists and demographers, this problem is represented by the old-age dependency ratio (OADR).
The OADR refers to the number of people in a society who contribute to the economy compared to those who depend on transfer payments of some kind. Most social programs for the aged as well as pension plans were developed when the OADR was much healthier.

As life spans have lengthened, the OADR has deteriorated. There are two reasons for this. Longer lives mean that more people are moving to the dependent column of the balance sheet. At the same time, falling birth rates have reduced the number of workers in the contributor column.

In 1950, there were about 17 workers in America for every retired person. Today, there are less than three contributors to each retired dependent. This ratio continues to worsen simply because people are living longer and birth rates are falling.

In the US today, politicians say that the economy is doing fine. But if that were true, we?d be running budget surpluses. Instead, the US government is borrowing nearly 30 cents of every dollar spent. Transfer payments to the elderly now account for about 30% of federal spending. The roughly $20 trillion dollar national debt continues to grow, and unfunded liabilities are 10 to 20 times that amount (depending on who?s doing the math).

Former head of the Federal Reserve Allen Greenspan has long been known as an optimist. He?s held the view that market forces are robust enough to counter political recklessness. But recently, Greenspan admitted that he has lost his positive outlook. The reason, in his words, is that ?we have a 9% annual rate of increase in entitlements, which is mandated by law. It has got nothing to do with the economy. It has got to do with age and health and the like.?

Our current economic woes aren?t rooted in traditional economic policies. The problem is ?age and health and the like.? In other words, it?s the OADR.

Increasing the number of people on the contributor side of the balance sheet won?t solve the problem. Japan, Germany, Italy, and the Scandanavian countries have spent billions trying to increase birth rates. And they?ve failed. Even if they succeeded, it wouldn?t help in time. It takes decades for newborns to enter the work force.

The best way to prevent the demise of Western economies and the eventual Greek-style collapse of social programs and pension plans is longer life and health spans. If more people can remain healthy and work or invest longer, it would produce the economic growth we need to fund the innovation that will usher in an unparalleled era of prosperity.

Politicians and unions claim that voters won?t accept an increase in retirement ages, but Americans are already working longer than ever before. In fact, the evidence shows that most people would work longer and save more to pay their own way if they could.

According to a study by Zoya Financial, almost two-thirds of Americans have to retire earlier than planned. This is largely due to problems with their health or that of their spouse.

Anti-aging strategies and biotechnologies aren?t just needed from the point of view of the individual. They are, quite literally, the only way to save modern economies from the unintended consequences of increased life spans? the collapsing OADR.

The mainstream scientific community is starting to accept that we must move from a model of disease treatment to anti-aging. Effective anti-aging therapeutics are in labs right now and will greatly increase health spans and working careers, saving Western economies and cultures from ruin in the process.

Bureaucratic and political inertia, though, is slowing the approval and adoption of these life and economy-saving solutions. The establishment will eventually come around, but only kicking and screaming.

Hence the world truly needs more medical professionals, and patients who can spread the word that the old model of treating diseases is obsolete, inhumane, and fiscally suicidal.