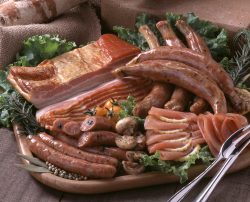 A new large study has linked consuming processed meats and red meats to a higher risk of death and heart disease. The study from Northwestern Medicine and Cornell University refutes a previous controversial study concluded that it was not needed for people to alter their diet in regards to processed and red meats.

Last fall the controversial report encouraged people to not worry about health risks by consuming processed and red meat which contradicts decades of nutrition advice. The report was widely criticized by public health experts including groups like the American Cancer Society and the American Heart Association. The recent study highlights the potential harm of a meat heavy diet.

The current research included a diverse group of 29,682 people with a mean age of 53.7 years at baseline and included 44.4% men and 30.7% non-white. All diet data was self reported by the participants who were asked to complete a long list of what they consumed for the previous month or year.

The study pooled together a large diverse sample from six cohorts and also included long follow-up data for up to three decades, harmonized diet data to reduce heterogeneity, adjusted a comprehensive set of con founders, and conducted multiple sensitivity analysis.

The research has shown that consuming 2 servings of processed meat, red meat or poultry, but no fish per week was attributed to a 3 to 7% increased risk of cardiovascular disease. And consuming 2 servings of processed or red meat and not poultry/fish per week was found to be linked to a 3% increased risk of all causes of death.

While it is a small difference, reducing processed and red meat such as deli meats, bologna, and pepperoni is worth trying to help reduce the higher risk of a variety of health problems. Modifying the consumption of these particular protein foods could be an important way for reducing the risk of premature death and cardiovascular disease at a population levels says the research team.

The study showed that the correlation to cardiovascular disease and mortality was high. The previous meta analysis last November recommended people not decrease consuming the amount of processed and red meats. People interpreted it to mean it is was okay to consume these foods, however the team states that the science does not support that.

The findings reinforce recommendations for people to prioritize healthier food choices such as vegetables, fruits, legumes, whole grains, fish, seeds, and nuts and limit the consumption of processed and red meats, fried foods, sugar laden beverages, and refined grains. Seafood, fish and plant based sources of protein such as legumes and nuts and including peas and beans, are excellent alternatives to meat. These foods are under consumed in the United States.

The study did find a positive association between consuming poultry and cardiovascular disease, but the evidence isn’t yet sufficient to make a clear recommendation in regards to poultry consumption.

Limitations of the study included only one dietary intake assessment and dietary behaviors could have changed over time. Also, how a food was cooked was not considered. Deep fat fried foods that contribute to trans fatty acids such as fried chicken and fried fish have been identified as a link to a variety of chronic diseases.