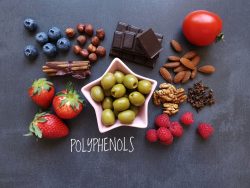 Foods that contain polyphenols can help counter inflammation in the older population by altering the microbiota in the intestines. They also activate the production of IPA (indole 3-propionic acid), which is a metabolite that comes from the decline of tryptophan caused by bacteria in the intestines.

Polyphenols are compounds that are natural, thought to be probiotics, and are mainly found in vegetables and fruits. A variety of polyphenols in the diet are known to have anti-inflammatory and antioxidant properties. In addition they can interact with gut bacteria to produce postbiotics such as IPA which have positive and beneficial effects on health.

The evidence is increasing verifying that a consistent diet of polyphenols can add to healthy aging. This is especially true if they are also combined with a healthy diet, routine physical activity and no alcohol and tobacco.

The study indicates that gut microbiota and polyphenols interaction can activate the growth of bacteria and is able to synthesize useful metabolites like IPA. This postbiotic has antioxidant, neuroprotective properties, and being anti-inflammatory, contributes to improving intestinal wall health. This compound will help in the avoidance of a variety of diseases that are linked with aging.

In consideration of the favorable effects of IPA on the microbiota in the gut and general health, it is vital to find strategies that can be reliable to enhance the creation of this metabolite.

The team executed a varied analysis to watch the IPA levels in the serum without analyzing the gut microbiota composition. They used fecal samples from 51 participants, 65 and older, who followed a polyphenol rich diet such as bitter chocolate, green tea, and fruits such as blueberries, pomegranates and apples.

The study results indicate that a polypheonol rich diet produced a notable increase in the IPA blood levels and a reduction in levels of inflammation and changes in the microbiota bacteria.

Surprisingly, the team did not notice similar effects in the participants who had kidney disease. This can be explained from the changes in the gut microbiota composition. These participants showed decreased amounts of the IPA at the start of the study in comparison to participants with kidneys that functioned normally.

The results may be relevant clinically because the low levels of IPA have been linked with function of the kidneys rapidly declining and chronic kidney disease.

Therefore, a diet rich in polyphenols including macrobiotic foods could increase the supply of IPA from changes in the gut microbiota composition. Increased levels of a postbiotic, such as IPA in the older population, could be helpful in preventing or delaying chronic diseases that decrease quality of life.