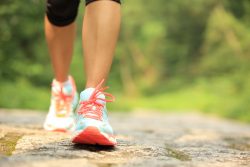 For years 10,000 steps per day has been the target for many people! But there is actually nothing magical about it! The original basis for establishing that number was never based on scientific basis. In fact it was part of a marketing campaign launched in Japan in1965 to help promote a pedometer. And it is a big number that many people find hard to reach!

Dr. I-Min Lee at Brigham and Women’s Hospital along with a professor at Harvard Medical School and a researcher on physical activity, set out to discover the basis for 10,000 steps and also study its validity. Their study published in JAMA Internal Medicine set out to answer 2 questions about mortality…how many steps per day are associated with lowering the mortality rate and does stepping up the intensity level make a difference with the same number of steps?

A study was designed that included about 17,000 older women with the average age of 72. This group tends to be less active and health issues occur and become more important as people age. Between 2011 and 2015, the participants wore tracking devices during waking hours to track their steps as they went about their daily activities.

Key findings showed that sedentary women averaged 2,700 step per day. The women who averaged 4,400 steps per day had a 41% reduction in mortality. Mortality rates continued to improve progressively before leveling off at bout 7,500 steps per day. About nine fewer deaths occurred per 1,000 person years among the most active group compared to the least active group.

The research shows that if mortality is a person’s major concern, then the study suggests that you can reap benefits from 7,500 steps per day. That is 25% fewer steps than the common goal of 10,000 steps. The study indicates that even light walking can result in benefits for older women.

The study was designed to look at just two factors. Since it was about mortality, it did not relate steps per day to anything related to cognitive functions, quality of life, or physical conditions. It does not tell us how many steps are needed in order to maximize those things. And in answer to the researchers second question, they did not find that the intensity of the steps mattered.