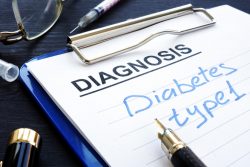 A new stem cell treatment has been developed to cure type 1 diabetes. An ongoing clinical trial by Vertex Pharmaceuticals has successfully treated the first patient. He had been living with type 1 diabetes for 40 years and was dependent on insulin.

Type 1 diabetes is a major disease affecting almost 1.6 million Americans. Keeping glucose levels in the normal range requires constant attention. Diabetics must check their blood sugar several times a day. This involves pricking a finger or wearing a glucose monitor. It is a life-threatening disease if not kept at bay.

There are many risks associated with the disease. It is the leading cause of blindness and kidney failure. Blood sugar level can plummet while a person is sleeping and can lead to leg amputation. It increases the chances of a stroke or heart attack and weakens the immune sys

The pancreas produces insulin and pancreas transplants are the current cure. There are also insulin producing clusters of cells, called islet cells that have been transplanted from a donor. The problem is that there is just not enough pancreas’ or donors to supply everyone.

It took many years to develop this tretment. This involved creating islet cells from stem cells. Finally, one night the experiment worked and functioning pancreatic islet cells had been made from embryonic stem cells.

The first patient in the clinical study had suffered 5 severe and potentially life-threatening episodes in the previous year. His blood sugar was extremely low during these occurrences. Tests revealed that his body was unable to create insulin.

For the trial, he was injected with the islet cells that were grown from stem cells. They were identical to the pancreatic cells that produce insulin lacking in his body. Since the injection his body now controls his blood sugar and insulin levels, curing the disease.

The result is remarkable. The clinical trials will continue for 5 years with 17 patients. The possibility of curing diabetes with this treatment could be life-changing.

To view the original scientific study click below:
Vertex Announces Positive Day 90 Data for the First Patient in the Phase 1/2 Clinical Trial Dosed With VX-880, a Novel Investigational Stem Cell-Derived Therapy for the Treatment of Type 1 Diabetes