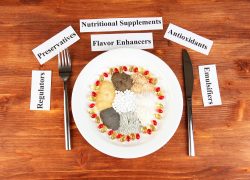 A new clinical research project has shown that the commonly used food additive carboxymethylcellulose will alter a healthy person’s intestinal environment. This will upset the levels of nutrients and good bacteria. The findings indicate that there needs to be further study on the impact of this food additive on the health of people.

Carboxymethycellulose, known as CMC, is a member of synthetic food additives called emulsifiers. They are used in a variety of processed foods to promote their shelf life and enhance texture. It has increasingly been used since the 1960s and has not been tested extensively in humans. It was thought that CMC was safe because the body eliminates it instead of absorbing it. However scientists are challenging this assumption because of the increasing value of health benefits from bacteria that live in the colon.

Tests on mice have shown that CMC and other emulsifiers did alter gut bacteria which resulted in more severe diseases. These included inflammatory conditions such as metabolic syndrome, colon cancer and colitis.

The researchers did a randomized, controlled study in volunteers that were healthy. The participants were housed at the site of the study. They consumed a diet that was additive free or the same diet with CMC. Due to the fact that the diseases CMC promotes in mice will take years to happen in humans, the team focused on metabolites and intestinal bacteria. They discovered that the consumption of CMC did change the make-up of bacteria that populate the colon by reducing some species. Also, fecal samples from the participants on the CMC diet showed an obvious depletion of the metabolites that are beneficial to maintain a healthy colon.

The team did colonoscopies on participants at the start and at the end of the research. They observed a subset of participants that consumed CMC had gut bacteria that encroached into the mucus. This has been previously noted to be a characteristic of type 2 diabetes and inflammation of the bowel. The consumption of CMC didn’t result in any particular disease during the two week study. But the results do support the conclusions of the animal studies that consuming CMC on a long term basis promote chronic inflammatory diseases. Further research of CMC is warranted.

It does disprove the argument that CMC just passes through the body to justify any lack of studies on the additive. Besides supporting the reason for further research of CMC, the current study does provide a blueprint to test individual additives that are added to food in a well controlled way.

The results have suggested that the CMC responses and most likely a variety of other additives to food are personalized. The team is now working on approaches to help predict which people might be sensitive to certain additives.